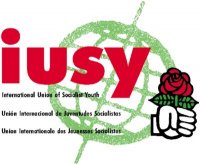 IUSY is a Global NGO made up of 149 socialist, social democratic and labour youth organisations from 100 countries all over the world. IUSY is lead by its Presidium that is elected at the World Congress with representatives from all over the world. The daily work is run by the Secretariat.[1]

The IUSY stands for the following goals:[1]

As at March 26, 2010, the following people worked for the International Union of Socialist Youth:[1]

As at March 26, 2010, the following organizations were members of the International Union of Socialist Youth:[2]