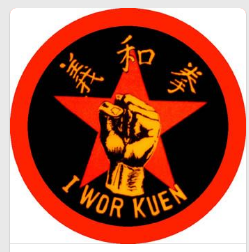 I Wor Kuen (Righteous and Harmonious Fists) took its name from a peasant organization that fought to expel foreigners from China during the so-called “Boxer Rebellion.” Founded in 1969 by second-generation Chinese Americans in New York’s Chinatown, it adopted a 12-point program Platform and Program, similar to those previously issued by the Black Panther Party and the Young Lords. It also advocated Mao Zedong thought and engaged in militant struggles in the community. It also started publication of a bi-lingual newspaper, Getting Together. 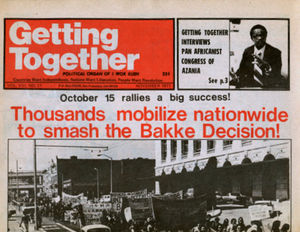 In 1971, I Wor Kuen became a national organization when it merged with former members of the San Francisco-based Red Guard Party, a group which was founded in February 1969 and disbanded in July 1971. Also influenced by the Chinese Cultural Revolution and the example of the Black Panther Party, the Red Guard Party had espoused Mao Zedong thought, advocated armed struggle and viewed itself primarily as a military rather than a political organization. By 1971, this focus on military rather than political organizing and other contradictions led to the Party’s break-up, but a group of former militants went on to join I Wor Kuen.

In 1972, to broaden its base and to reach out to community members unwilling to support an explicitly communist organization, I Wor Kuen created the Chinese Progressive Association which, after several years, had branches in New York, Boston and Los Angeles. 1972 also saw I Wor Kuen briefly participate in the National Liaison Committee, a joint party building effort of the Revolutionary Union, the Black Workers Congress, and the Puerto Rican Revolutionary Workers Organization.

Throughout the 1970s, I Wor Kuen frequently clashed with other Marxist-Leninist groups active in Chinese communities across the country, including Wei Min She and the Asian Study Group/Workers Viewpoint Organization.

In 1978, I Wor Kuen merged with the August 29th Movement to found the League of Revolutionary Struggle (Marxist-Leninist).[1]

Asian people in Amerika have been continually oppressed by the greedy, traitorous gangsters of our own communities and by the wider racist exploitative Amerikan society. We have been bombarded by the media (newspapers, T.V., radio, and schools) with false ideas about how we should accept our position in this society. They have tried to brainwash us and have even coerced us into going overseas and fighting against our own people in S.E. Asia.

But, Asian Amerikans have been fighting back against the oppression of this country ever since we first tasted the bitterness of Amerika’s racism and exploitation. The long and heroic history of the Asian Amerikan struggle inspired and strengthened us in our purpose. No longer can we endure these oppressive conditions. We cannot let our ancestors’ struggles go down in vain. We know who are our real enemies and friends and we have new strength for we are joining our sisters and brothers within this country and around the world to fight for freedom and justice against the rulers of this country.

We have tried the peaceful means of petition, courts, voting and even demonstrations. But our situation remained the same. We are not free. We want to improve the living conditions of our people and are preparing to defend our communities against oppression and for revolutionary armed war against the gangsters, businessmen, politicians, and police. When a government oppresses the people and no longer serves the needs of the people, we have the right to abolish it and create a new one. We are working for a world of peace, where the needs of the people come first, which is without class distinctions and is based upon the love and unity of all people.[3]