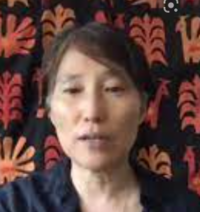 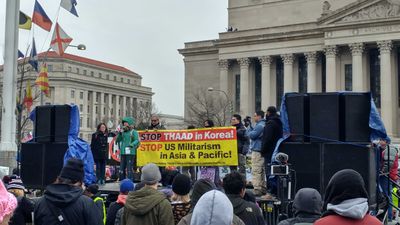 Template:TOCnestleft Hyun Lee a New York City-based writer and activist. She is a member of the Solidarity Committee for Democracy and Peace in Korea. She is also a Korea Policy Institute fellow and a member of Nodutdol for Korean Community Development.[1]

This coalition puts a focus on diaspora, refugee, veteran, Black, Brown, and Indigenous communities who bear the brunt of this country’s militarism to challenge the myth that more police, wars, and weapons have made any of us safer or more secure. In the midst of the COVID-19 pandemic, it is imperative that we forge new avenues for global solidarity that can lead to real and lasting peace and security. On April 6, at 3 p.m. EST / 2 p.m. CST / 1 p.m. MST / 12 p.m. PST (the eve of the Wisconsin Democratic Primary), the coalition will host a virtual town hall examining U.S. military policy, defense spending, the ongoing 'War on Terror,’ and militarization at home.

Moderated by Marc Lamont Hill, the Town Hall will launch a shared campaign demanding the immediate end to the 2001 Authorization for the Use of Military Force (AUMF) that has been the pillar of escalated U.S. military intervention under the banner of the War on Terror. 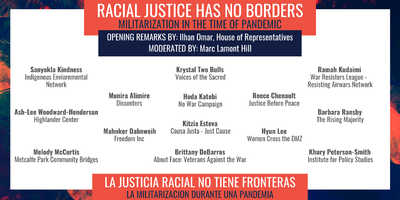 Counter-clockwise from woman in white :

Photo by Matthew Weinstein, Clarke constituent and Brooklyn For Peace. 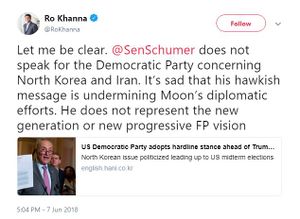 In Washington DC today meeting with Cong offices to discuss #KoreaPeaceTreaty and women’s inclusion in Korea peace process. So thrilled to meet @AOC in person! The closest we have ever come to electing a Congresd by and for the people! @CatKillough @KCRobinsonWPS @WomenCrossDMZ 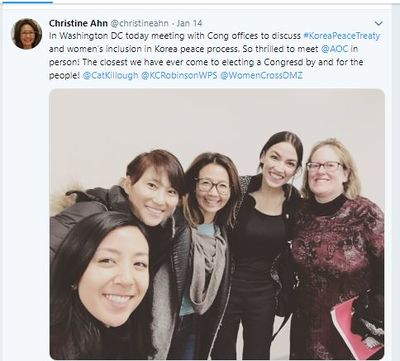 During the inauguration for President Trump on January 20 2017, Hyun Lee spoke at a rally against U.S. intervention in North Korea organized by ANSWER Coalition.

From an article posted at the Korean American National Coordinating Council, Inc. website:[3]

"Lee called on the U.S. government to find a peaceful resolution to the crisis on the Korean Peninsula and stop provoking war through military exercises that simulate the collapse of the North Korean regime. She spoke about the need — “now more than ever” — for a peace treaty to end the Korean War and called on U.S. activists and progressive-minded people to support the struggle of the Korean people against war and militarism:

"She concluded by chanting, “End the Korean War! Peace treaty now! U.S. troops out of Korea!”

"The Stop THAAD Task Force was one of many groups at the anti-Trump rally along the official parade route on the day of Trump’s inauguration. Various movements from across the country, from those fighting for the rights of immigrants, women and LGBTQs to labor and racial justice activists and peace and anti-war groups, coalesced on day one of Trump’s presidency and pledged to fight his right-wing agenda."

In 2011 Hyun Lee was active in Nodutdol. 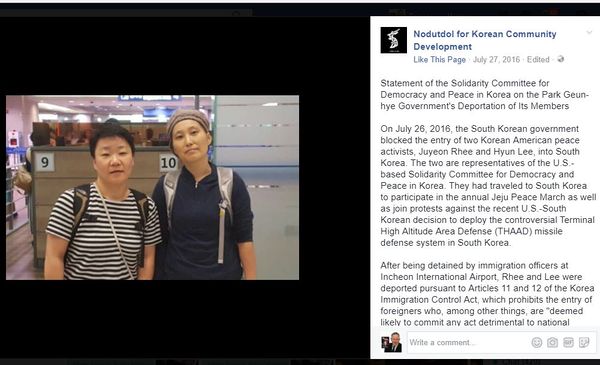 On July 26, 2016, the South Korean government blocked the entry of two Korean American peace activists, Juyeon Rhee and Hyun Lee, into South Korea. The two are representatives of the U.S.-based Solidarity Committee for Democracy and Peace in Korea. They had traveled to South Korea to participate in the annual Jeju Peace March as well as join protests against the recent U.S.-South Korean decision to deploy the controversial Terminal High Altitude Area Defense (THAAD) missile defense system in South Korea.

After being detained by immigration officers at Incheon International Airport, Rhee and Lee were deported pursuant to Articles 11 and 12 of the Korea Immigration Control Act, which prohibits the entry of foreigners who, among other things, are "deemed likely to commit any act detrimental to national interests of the Republic of Korea or public safety."

Rhee and Lee had traveled to South Korea numerous times in the past and encountered no barrier to entry. They have never broken any laws in South Korea, much less been deported in the past.

The denial of their entry can only be seen as an attempt by the Park Geun-hye administration to block peace activists from internationalizing the growing opposition in South Korea against THAAD deployment. Since announcing its decision to collaborate with the U.S. military to deploy the missile system in Seongju, North Gyeongsang Province, the government has waged an aggressive campaign to crack down on all those who oppose the government's decision. President Park recently referred to those voicing opposition, many of whom are ordinary Seongju residents, as "subversive forces" and declared, "It's important to block subversive forces from all affairs, and we must be thorough in weeding them out."[4]

Working Group for Peace and Demilitarization in Asia and the Pacific