The Huey P. Newton Gun Club is a self-described "coalition of members from various different groups/organizations coming together in unity to practice our 2nd amendment right 'To bear Arms'." According to their website, they "want immediate end to police brutality and the murder of black people by those that perpetuate capitalism and white supremacy."

"Guerrilla Mainframe has been a primary component to this formation creation first publicly doing a armed maneuver on August 20th 2014. The reason for the patrols was a response to Open Records Request done by Dallas Communities Organizing For Change which showed a consistent issue of Police Brutality as it relates to black, brown, and poor whites. Clinton Allen was murdered on March 10th 2013 by DPD officer Clark Staller #9514, Clinton Allen was shot seven times including once in the back, was another case of a unarmed African American victim of apparent police violence. Since the first patrol in 2014, there has been numerous patrols in Oak Cliff, South Dallas, as well as Pleasant Grove.

The platform for these patrols are as follows: 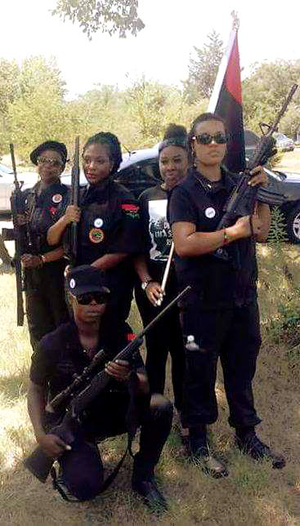 According to their website, the Huey P. Newton Gun Club aspires to "develop over time to a regimented Black Army."

"We do not simply just want to be “militant” but rather develop over time to a regimented Black Army. A Black Army that will prevent and deter incidents like Sandra Bland, Mike Brown, or the Tulsa 1921 bombing from ever occurring again. We believe in freedom and our right as a nation within a nation to determine the political will and destiny of our people. It should be embarrassing to be colonized and we intend to change the course of our current condition and better the lives of those we serve. We are servants above anything else and more than militants we employ the revolutionary ideals of nationalism. Nationalism will only organize the talents that we currently possess as a people and aid our function as a nation. The beginning of this tasks is to arm the body and minds of black people in America in which the Huey P. Newton Gun Club intends to be a part of. In conclusion we want immediate end to police brutality and the murder of black people by those that perpetuate capitalism and white supremacy. We realize that our efforts must also be directed internally, which means we must love ourselves and treat each other the way we would like to be treated. Black is beautiful!! The ultimate goal is to unify mentally as well as politically the Afrikan mind worldwide and call for a Pan Afrikanist solution. With this in mind we have a political right to agitate for our own political freedom and journey for liberation."

Huey P. Newton Gun Club was featured along with other "Left-Wing Militants" BAMN, Redneck Revolt, and the Bastards Motorcycle Club in an article at Mother Jones.

"After a white Dallas police officer killed an unarmed black man in 2013, community organizers Yafeuh Balogun and Babu Omowale launched the Huey P. Newton Gun Club, a coalition of black self-defense groups named after the co-founder of the Black Panthers. 'We’re going to educate black, brown, and poor white people to arm up or at least get familiar with weapons,' Balogun says. 'So if a situation does arise, if they feel threatened, at least they can defend themselves.' When an anti-Muslim group held an armed protest outside a Nation of Islam mosque in South Dallas in April 2016, armed Gun Club members showed up to counterprotest. Balogun says his group, which operates armed patrols in South Dallas, has drawn the attention of the FBI. But he also emphasizes that it’s not just about guns: 'What we advise people is to not necessarily be so quick, so fast, to pick up arms.'"[2]