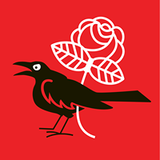 A rally and fund raiser for returning Democratic Socialists of America member, Judge Ben G. Levy to the 14th Court of Appeals was held in Houston January 26. 1990.[1]

"Green Jobs for All"

"Green Jobs for All : How the Gulf South Wins a Green New Deal"

Join the Houston DSA chapter for this webinar with a panel of community and labor leaders of the Gulf South who will share their vision for how the region can win a GND and how you can be a part of this movement. 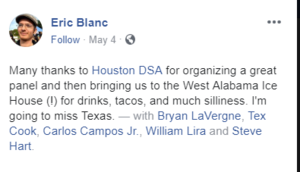 Many thanks to Houston DSA for organizing a great panel and then bringing us to the West Alabama Ice House (!) for drinks, tacos, and much silliness. I'm going to miss Texas. — with Bryan LaVergne, Tex Cook, Carlos Campos, Jr., William Lira and Steve Hart.

‪Our organizers and speakers of our Medicare for All Town Hall! #DSAM4A ‬

‪Thanks Ashkan Jahangiri of Austin DSA, Workers Defense, Tim Faust, and the Houston DSA members that made our town hall a success.‬

‪Come canvass with us tomorrow to fight for health justice!‬

Houston Democratic Socialists of America, announced the endorsement of three additional candidates for the March 2018 primary, bringing the total number of endorsed candidates to four in this election cycle. The endorsements took place via a majority vote of the organization’s membership at its January general meeting.

“These candidates represent the highest ideals of our organization: a commitment to fighting for social and economic equality, building democracy, and empowering working people in our institutions, workplaces, and communities.” said Amy Zachmeyer, Houston DSA co-chair. “We can’t wait to work alongside these campaigns to spread our values and build a better world for all the people in the Houston area.”[5]

The Houston Communist Party USA club is also building a close and integrated plan of action with the local chapter of the Democratic Socialists of America (DSA).

Our strategy is to build a united front within the popular front. The united front includes Our Revolution, DSA and the Houston Area Progressives. Through it we can become even more involved in electoral struggles, the trade union movement, work in the African American community and with immigrants. This includes lobbying, demonstrations, picket lines, and voter registration.[6] 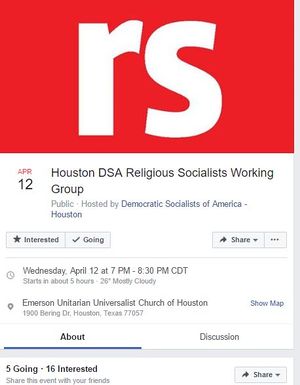 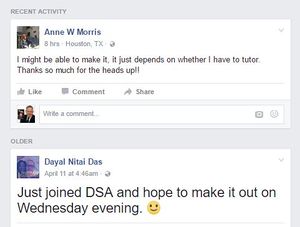 Houston DSA's Religion and Socialism group is open to DSA members of all faiths whose socialism is in some way inspired by their spiritual identity.

There is a long tradition of religious socialism in the United States that has been ignored or forgotten. The Religion and Socialism group of Houston DSA refuses to cede the ground of faith to the religious right.

Many in faith-based communities hesitate to join a socialist movement because of what they perceive as an anti-religious bias among leftists.

We see ourselves as a bridge group. Our work is with and within faith communities as allies and coalition partners. Examples of such work include the New Sanctuary Movement, religion and labor coalitions, reproductive justice, and LGBTQ advocacy. 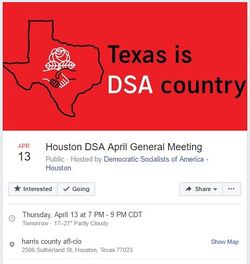