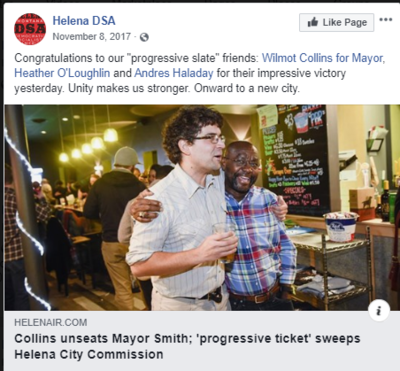 Congratulations to our "progressive slate" friends: Wilmot Collins for Mayor, Heather O’Loughlin and Andres Haladay for their impressive victory yesterday. Unity makes us stronger. Onward to a new city.

In November 2017, in the Montana capital of Helena, progressives swept the races for city commission and elected Wilmot Collins as the first black mayor in the state’s history*.

Collins, who arrived in Helena 23 years ago as a refugee from the civil war in Liberia, unseated 16-year incumbent Jim Smith. Collins, a child protection specialist for the Montana Department of Health and Human Services, holds a bachelor’s degree in political science and sociology, and a master’s degree in human resources management. His mayoral platform included addressing teen and veteran homelessness in Helena, ensuring access to clean water and pushing a return to community policing.

Many who know Montana as more than a red patch on an electoral college map weren’t surprised by the progressive sweep. Frank Kromkowski, an activist with Our Revolution-Helena and the local chapter of Democratic Socialists of America , points out that voters in Lewis and Clark County, of which Helena is the seat, favored Bernie Sanders in the 2016 Democratic primary. Sanders also won the state by more than six percentage points.

“Here in Helena, Bernie Sanders was really big,” says Kromkowski. Since the 2016 election, groups like Our Revolution and DSA have dramatically swelled their ranks and spawned local chapters in nearly every U.S. state. According to Our Revolution board chair Larry Cohen, the organization’s email list for Montana boasts 20,000 names. Neither Our Revolution nor DSA officially endorsed any candidates, but they did co-sponsor a forum with the progressive candidates and Kromkowski thinks many individual members supported the campaigns.