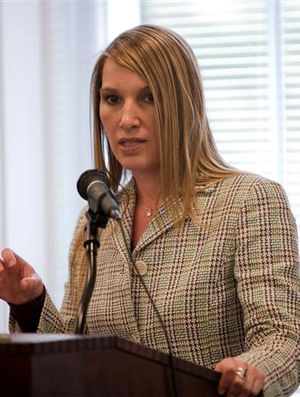 Heather A. Higginbottom was, In January 2011, during a major shake-up in the White House, promoted to serve as deputy director of the Office of Management and Budget under Jacob Lew.

As 2008 presidential candidate Barack Obama’s national policy adviser, Higginbottom reported directly to David Axelrod, senior adviser to the campaign. She helped shape the campaign’s strategies on everything from education to health care.

Higginbottom is widely credited with fostering the campaign’s image as a low-drama environment where diverse opinions were welcome. The New Republic writes that Higginbottom’s “smarts and political instincts made her a highly valued, if unheralded, adviser.”[1]

Higginbottom was formerly with the Obama for America campaign. In an interview on the University of Rochester website, she admits that she has lofty ideas about what can be accomplished in politics:

As deputy director of the Domestic Policy Council, Higginbottom helped coordinate one of three principal advisory groups overseen by the president. In addition to the domestic council, the other two main White House councils are the National Security Council and the National Economic Council. Chaired by the president and made up of cabinet secretaries, the domestic council is responsible for advising the president on health care, poverty, education, and other issues. Higginbottom reported to Melody Barnes, the director of the Domestic Policy Council.[3]

Higginbottom is native of Chenango Bridge, a small town outside Binghamton, N.Y.,

During her junior year, Higginbottom got her first taste of Washington as part of the University’s Washington semester program. She started in the office of U.S. Rep. Rob Andrews of New Jersey, where she found herself vying for work with several interns on his staff. Then she met U.S. Rep. Gene Green, a Houston Democrat who had just been elected and had yet to hire an intern. By the summer between her junior and senior year, she was coordinating Green’s intern program.

After graduation, she returned to Washington and found a job with the nonprofit Communities in Schools, which focused on programs to keep high school students from dropping out.

“Heather was always fair, inclusive, and curious about what was going on in the world,” says longtime friend Jay Bruns , director of global brand management for Hasbro Games. “She wanted to understand, not judge people, and she believed that the world didn’t have to be the way it had always been.”[4]

Higginbottom worked for former President Bill Clinton on his Summit for America’s Future in 1997 as the communities of faith coordinator.[5]

From 1999 to 2007, Higginbottom served as legislative director for Senator John Kerry of Massachusetts.[5]

She also served as the Deputy National Policy Director for the Kerry-Edwards Presidential Campaign for the primary and general elections.

After earning a master’s degree in public policy and philosophy at George Washington University, Higginbottom considered leaving D.C., but she landed a job with Massachusetts Senator John Kerry. Working with Kerry was a pivotal experience, she says.

“I had the good fortune to work with someone who ran for president,” she says. “Once you do that, and you see the potential for change that you can make in people’s lives, it’s addictive.”

After Kerry’s defeat, Higginbottom became executive director of the American Security Project, a think tank Kerry helped establish that promotes the debate over the appropriate use of American power in the 21st century. She returned to Kerry’s staff in February 2006 until she resigned a year later to join the Obama campaign.[6] 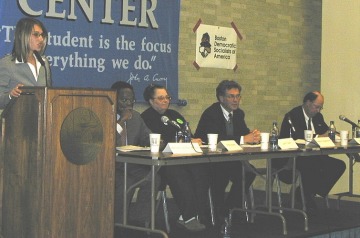 Jack Clark was Boston DSA Chair, William Julius Wilson is a long time DSA member and Bob Haynes is President of the Massachisetts AFL-CIO, with which DSA works "frequently".

As policy director for the Obama campaign, Higginbottom was part of the campaign’s inner circle, working with the Illinois senator and his staff to craft policy positions on domestic issues as the campaign moved along. She helped prep Obama for debates with Republican John McCain, and she was often on the phone with journalists, explaining the details of the candidate’s campaign goals.

She met regularly with Obama, hashing out the broad outlines of policies that she’d refine with her staff.

“Senator Obama is really even-keeled, smart, and fun to work with,” she says. “You can sit down with him and have a conversation about the economy or urban poverty, and he gets it quickly.”

She says Obama listens to people and seeks out advice across the ideological spectrum.

“He has an open mind and benefits from hearing from a wide range of people,” she says.

As Obama slogged through the prolonged primary season, Higginbottom and her staff developed policies on a broad range of issues. Obama has been a strong proponent of national service and has said he wants to make college education more affordable. Higginbottom led the team that crafted a policy that would provide a $4,000 tax credit to college students for each year that they perform 100 hours of community service.

“He gave us the task of coming up with a plan that would address college affordability and national service,” she says. “We released that plan in the fall of 2007. Now I’m hoping it will happen.”

The primary season began with Higginbottom and one other staff member on Obama’s policy team, a group that grew to 15 during the general election campaign.

“There are no Saturdays or Sundays off,” says Higginbottom. “A campaign starts and ends and there’s not much in between.”

As she shifts her focus from the success of the campaign, Higginbottom still finds time to relish some of the idealism that first launched her into public policy more than two decades ago. In late December 2008, she and Melody Barnes visited the White House for the first time as members of the Obama administration.[8]