Template:TOCnestleft Harley Shaiken is a prominent U.S. labor academic and socialist activist. He is director of the Center for Latin American Studies at the university of California, Berkeley.

Shaiken is a leading anti globalisation activist and advocate for relaxing U.S. sanctions against Cuba.

Seymour Melman was part of a circle of critical intellectuals with epicenters in various networks. Three were central. First, Melman was part of the Frame of Reference group led by University of Pennsylvania Professor Zellig Harris. Second, he was part of a group of critical scholars at Columbia University including Robert S. Lynd, a leading sociologist in the United States. Third, he was connected to a wide network of national and international scholars and activists concerned with disarmament, economic conversion and economic democracy, e.g. Noam Chomsky, Marcus Raskin, Harley Shaiken, John Ullmann, Lloyd J. Dumas, John Kenneth Galbraith, among many others.

Links to Democratic Socialists of America

The keynote speaker was globalization expert Harley Shaiken who gave a chilling description of the consequences of corporate globalization as well as some suggestions as to how progressive activists can fight this phenomenon. The dinner raised over $6800 for Detroit DSA.

In 2005 Harley Shaiken served as a trustee[2] of Center for American Progress. Professor, University of California at Berkeley

In 2008 Harley Shaiken served on the board of directors[3]of American Rights at Work.

In december 2008, the Wall Street Journal reported that Rep. Rosa DeLauro (D-CT) and Professor Harley Shaiken had emerged as finalists for the job of Secretary of Labor[4]. the job eventually went to Shaiken's American Rights at Work colleague Hilda Solis.

In 2009 Harley Shaiken of University of California, Berkeley served on the advisory board of UC Berkeley Labor Center.[5] 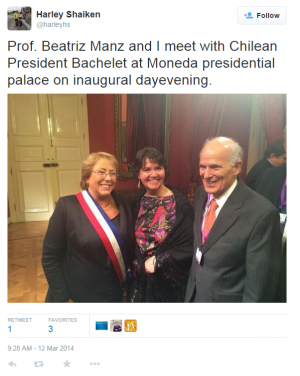 Beatriz Manz was honored with an invitation to the inauguration of Chilean President Michelle Bachelet, in March 2014.[6]

Harley Shaiken was there too.