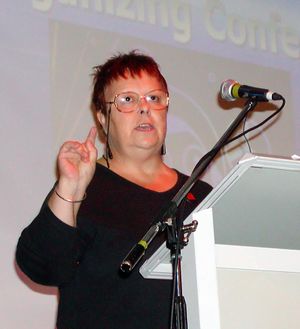 Hannah Middleton is a leading "peace" and Communist Party of Australia activist.

Dr Hannah Middleton was born in Preston, England, in 1942 and grew up in London. Between 1960 and 1961 she was Mayoress of the London borough of Greenwich. In 1964 she graduated in African Studies (BA Hons) from University of London, having spent three months in the previous year in northern Nigeria. After a variety of jobs, including a spell with the African Section of the British Broadcasting Corporation, she moved in 1965 to East Germany where she worked for three years as a lecturer in English language and institutions at Humboldt University, Berlin.

In 1968 she became a postgraduate scholar at the Bereich Ethnographie, Humboldt University. Between April 1970 and February 1971 she carried out fieldwork in Australia, living for eight months with the Gurindji people of the Northern Territory. In 1972 she presented her doctoral thesis, 'The Land Rights and Civil Rights Campaign of the Gurindji at Wattie Creek'. She moved to Australia in 1974. Hannah Middleton became a member of the Communist Party of Great Britain in 1962 and joined the Socialist Party of Australia in 1974.[1] 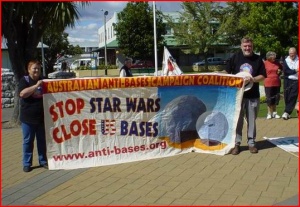 People from all around New Zealand converged on the super-secret Waihopai satellite interception spy base, near Blenheim, on the weekend of January 24-26, 2003, for an anti-war protest. The New Zealand Anti-Bases Campaign, which organized the protest, points out that as the world stands on the brink of being sucked into an aggressive American-led war on Iraq, Waihopai is New Zealand's most important contribution to the American war machine.

The Waihopai protest was joined by representatives from the Australian Anti-Bases Campaign Coalition, Denis Doherty and Hannah Middleton. In October 2002 the AABCC organized a major protest at the huge US spy base at Pine Gap (near Alice Springs), which is serviced through the US military base at Christchurch Airport.[2]

Middleton spoke at the Blenheim festivities in Seymour Square and Doherty regaled the masses out at the spy base later in the afternoon.[3]

“This election signals a process of renewal and reinvigoration for the Communist Party”, said Central Committee Chairperson Warren Smith.[4] 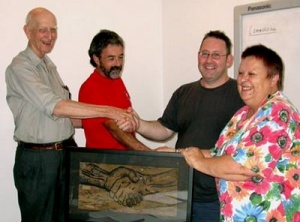 The visit included a meeting with Communist Party of Australia leaders Peter Symon and Hannah Middleton.[5]

The Central Committee Executive of the Communist Party of Australia announced June 1, 2013 that it has accepted a request by Comrade Hannah Middleton to be relieved of her responsibilities as General Secretary of the CPA.

Comrade Hannah would remain active on the Party’s Central Committee and other leading Party organisations.[6] 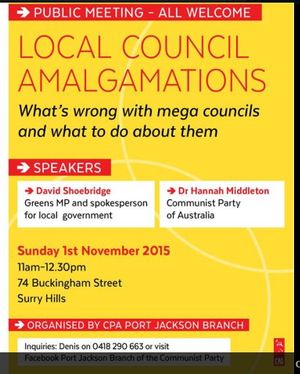