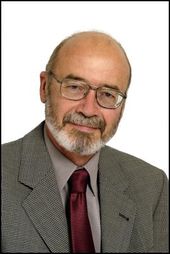 Grant C. Morgan is the co-founder of the Resident Action Movement party in New Zealand. The party is also affiliated with New Zealand's Oliver Woods.[1]

In the 1970s and '80s Morgan spent 15 years working on the railways in the Waikato. he joined the Communist Party of New Zealand, circa 1976, serving on the party's National Executive by 1989.[2]

By 1990, Morgan was General Secretary of the openly Stalinist, pro Albanian, Communist Party of New Zealand. [3]

At Easter 1994 Morgan spoke at Socialism '94 in Auckland, as General Secretary of the Communist Party of New Zealand.

In 1995 Ross Crook, Barry Lee and Grant Morgan were elected to the executive of the newly formed Socialist Workers Organization, an affiliate of the Trotskyist International Socialist Tendency[4]

In May 1995, Morgan took part in a protest against the Asian Development Bank Conference in Auckland. [5]

In 1999 he was involved in a State Housing Action Coalition rent strike, occupying Len Parker' s house in South Auckland

In May 2000 Morgan was a speaker with Chis Trotter at SWO's Socialism 2000 hui at Metro College, Auckland. Morgan spoke on "Activism Under a Social Democratic Government".

In 2004 Morgan was editor of Socialist Worker Monthly Review.

In 2003 Morgan was spokesman for the socialist Worker front, Residents Action Movement, an electoral alliance aiming to kick business candidates off the Auckland City Council [6]

In 2004, Morgan was a RAM candidate from Manukau, for the Auckland Regional Council - "55, spokesperson for RAM, led rates boycott committee which was a regionwide organiser of the Rates Revolt, spent nine years in an ultimately successful campaign to return the state house rents of modest income people to affordable levels, lives in Mangere Bridge."

On June 11,2005,at the Australian Socialist Alliance Conference, two international guests, Mike Treen, from the Unite union in New Zealand and Grant Morgan from the Socialist Workers Organisation, addressed the conference on the lessons from the similar attacks on unions across the Tasman. Greetings were received from Craig Johnston, Chris Cain (bringing greetings from WA’s MUA, Construction Forestry Mining and Engineering Union and Electrical Trades Unions), the Communist Party of Sudan, the Kurdish Independent Labour Party and the Freedom Socialist Party of the USA.

Among the most "exciting developments" discussed at the Asia-Pacific International Solidarity Conference held in Sydney at Easter, 2005, was the rapidly changing map of New Zealand politics, in particular, the development of the Maori Party, the UNITE union and the Resident Action Movement.

Several left-wing leaders from New Zealand attended the conference, including Matt McCarten, who was until recently the campaign manager for the Maori Party, Global Peace and Justice Auckland leader Mike Treen, and David Colyer and Grant Morgan from NZ Socialist Worker, who all addressed a feature session on March 28.

The Workers Charter was personally endorsed by these 119 individuals, including Grant Morgan, organiser of RAM & secretary of Socialist Worker (Auckland).

In September 2007 a statement was circulated by the blog Bolivia Rising in support of the revolutionary government of Bolivia;[7]

The democratically elected government of Bolivia's first indigenous president Evo Morales Ayma, which is heading a process of democratic change, is Washington's immediate target in Latin America today. Bolivia is in Washington's sight, not only because it is viewed as the weakest link of the growing axis of hope in the region, but because of its role as a catalyst for inspiring the struggles of indigenous peoples, regionally and internationally, for real social justice...

Now is the time for all intellectuals, union militants, solidarity activists, political parties and progressive minded individuals who believe in real justice and equality to raise their voices in defense of the Bolivian government and its people. No to US interference in Bolivia!

Kia Ora Gaza has personal links with radical british M.P. George Galloway, founder of Viva Palestina. In 2007 Ismail Waja and Grant Morgan , the co-organisers of Kia Ora Gaza, brought George Galloway out to Auckland to speak. Morgan had helped form a coalition called Voices of Peace to "counter a clique of professional Islamophobes from Australia who were fronting conferences in New Zealand. Their aim was to establish an anti-Muslim activist network in our land."

George spoke powerfully at a central city theatre whose 800 seats were all filled. We had to turn away half as many again. He also packed out one of the biggest lecture theatres at the University of Auckland. George's high profile mobilised mass media coverage and widespread public concern, helping Voices of Peace to roll back this threat from hard-line racists across the Tasman.

Voices of Peace was funded by over $30,000 in donations collected by Ismail and Morgan.

We asked for our accounts to be scrutinised by a professional auditor, who gave his services free. Every cent was accounted for.

Now Ismail and I are once again fronting a big fund-raising drive. And we are once again working with George around an issue of social justice and human dignity.

Another organiser of Viva Palestina is Nicci Enchmarch, a New Zealander who was arrested on the Mavi Marmara soon after "giving solace to Turkish aid worker Cevdet Kiliclar as he lay dying from a gunshot to the head".

Our website kiaoragaza.net pays tribute to the nine humanitarian martyrs gunned down on the Mavi Marmara. Nicci is the liaison person between Viva Palestina and Kia Ora Gaza.

Most imports that are most needed by the people of Gaza, such as building materials to reconstruct their shattered dwellings, remain on Israel's "blacklist". In addition, all exports from Gaza remain banned, thus ruining their economy and ensuring mass poverty. And the right to free travel is still denied to Palestinians in Gaza. They remain prisoners of Israel.

The much-touted "easing" of the siege may be 5% reality and 95% propaganda. Even that small blessing is entirely the result of international pressure on the state of Israel coupled with the gallant resistance of the people of Gaza.

The International Red Cross says the blockade of Gaza remains "illegal". A growing number of governments around the world are calling on Israel to completely lift the siege. They are reflecting the power of public opinion. The international convoys setting off in September will ratchet up pressure on the Israeli government.

We may be seeing the start of a process similar to what brought the internationally loathed system of apartheid in South Africa to its knees.[8] 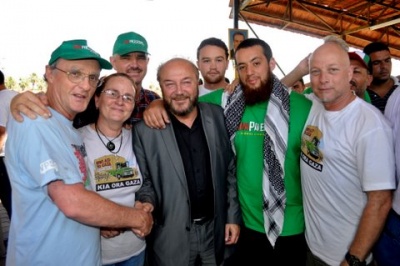 In October 2010, a six-person Kia Ora Gaza team was part of the huge Gaza aid convoy that successfully broke Israel’s blockade a few days ago to deliver desperately-needed medical supplies along with a message of international solidarity.

“Our Kiwi volunteers are authentic heros who put their bodies on the line to help people in need on the other side of the world,” said Grant Morgan, co-organiser of Kia Ora Gaza.

“We are celebrating their historic victory with a welcome home ceremony upon their arrival at the airport. We invite all supporters of Kia Ora Gaza to join in this special occasion.”

In February 2013, at a leadership forum of Kia Ora Gaza, Grant Morgan stood down as chair of the solidarity network and editor of the website kiaoragaza.net. His departure had been well flagged over the past 12 months.

Grant has been busy with research and networking around the pending collapse of the international capitalist system. Now he needs to devote his energies to a capitalist collapse website as its launch date gets closer.

Circa 2009, the list of Initiating Members and Supporters of the New Zealand Committee to Free the Cuban Five, included Grant Morgan, Chairman Resident's Action Movement, Auckland.[11]

The Socialist Worker central committee in August 2011 consisted of;[12]