Much appreciation to Bernie Sanders and his staff for coming out to bear witness at the For-Profit Children’s Detention Center in Homestead this morning. We bumped into Nina Turner on our way home. Always humbled to meet a so many strong voices filled with compassion for ALL. 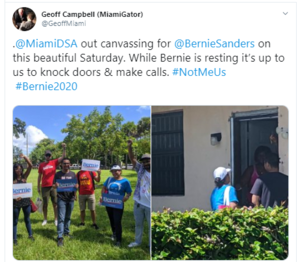 Geoff Campbell is a member of Miami Democratic Socialists of America member.

I had the opportunity to meet mayor Andrew Gillum last year. We had a great conversation about the future of our state and his campaign for Governor.

He is the most progressive candidate on the democratic primary. He embraced Bernie’s Medicare for All plan and believes that healthcare should be a fundamental right, not a privilege. His platform also includes criminal justice reform, rebuilding o... See More

Meeting of the People's Progressive Caucus of Miami-Dade at our community picnic. What a privilege it is to build community with these folks. — with Geoff Campbell, Erika Grohoski Peralta, Andrea Perez, Alexa Lubin, William Byatt, Zenia Perez, Mark Bernstein and Gregory Saint-Jean.