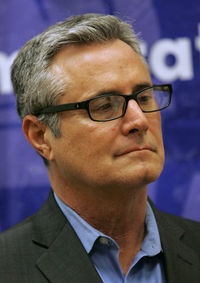 Gary Kroeger via the Iowa Courier

Gary Kroeger is a Berniecrat, a term used for those democrats (generally) running for office who have expressed support of former presidential candidate Bernie Sanders.[1]

Gary Kroeger was endorsed by the Iowa affiliate of AFL-CIO: AFL-CIO - Iowa for the 2016 election. [2]

Endorsed by Our Revolution

Gary Kroeger was endorsed by Our Revolution, an organization run by former campaign workers and supporters of former socialist presidential candidate Bernie Sanders.[3]

“If the Founding Fathers intended something for education, it was specifically that you be an investment, our investment as a society. … That is the greatest stimulus for our future and our prosperity right there,” Kroeger said. “It’s not a bottom-line equation here, where we’re profiting off of your education. And that is fundamentally wrong.”[4]