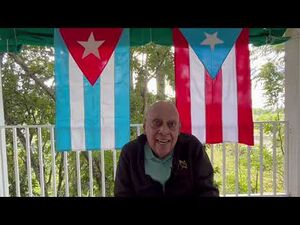 Frank Velgara was a member of the Socialist Front of Puerto Rico. He was also "a founder and leader of the July 26 Coalition and the New York-New Jersey Cuba Si Coalition."[1]

"It is with great sadness to report that we have just learned that our dear brother Frank Velgara has just passed after a long battle against cancer. Our deepest condolences to his family, friends, and comrades. Of course, in our grief, we are also inspired by brother Franky’s incredible example of selfless, revolutionary socialist struggle over many decades. We can start with his leadership over decades in the struggle for the freedom and independence of his beloved Puerto Rican nation and oppressed people on the island and in the diaspora. Franky was an ally and comrade of any and every progressive struggle and oppressed people. Like Fidel said about Che, Frank did not require elaborate arguments to fight against injustice and oppression. Franky was a highly conscious, unrelenting, uncompromising anti-imperialist and internationalist.

"In today’s growing and expanding Cuba solidarity and anti-blockade movement in the US, we must give special tribute to brother Frank. For many decades he was at the center of the defense of the Cuban socialist revolution in this area, in Puerto Rico, and across the US. Frank was a founder and leader of the July 26 Coalition and the New York-New Jersey Cuba Si Coalition. Frank’s exemplary, groundbreaking work and struggle to free political prisoners, including the Cuban Five heroes was inspiring. In all of these examples of his amazing life work, and many more can be cited, Frank was also always a force against sectarianism and for unity in struggle. This is a permanent part of his legacy as we carry on in his spirit. Franky was such a warm person and presence for all who worked with him, of commitment, humor, wit, love for people, and for struggle against exploitation and oppression.

In our terrible sadness we raise our fist to say:

Spark of the Cuban revolution 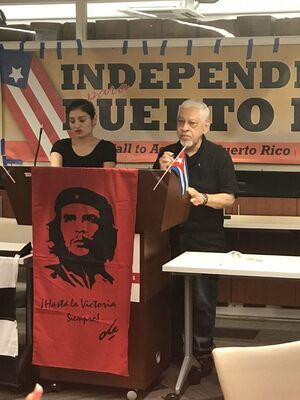 A standing-room-only crowd attended the annual July 26 commemoration organized by the New York-New Jersey Cuba Si Coalition and hosted by the New York State Nurses Association in Manhattan on July 27.

July 26 marked the 66th anniversary of the attack on the Moncada barracks led by Fidel Castro Ruz and dozens more revolutionary forces in an attempt to overthrow the government of the brutal pro-U.S. Cuban dictator, Fulgencio Batista. Though the attack failed militarily, it helped to lay the political basis for the triumph of the Cuban Revolution less than six years later on Jan. 1, 1959.

Speakers included the Cuban Ambassador to the United Nations, Ana Silvia Rodriguez; Ed Ortiz, from Call to Action on Puerto Rico; Gail Walker, director of IFCO/Pastors for Peace; William Camacaro, from the Venezuela Bolivarian Circle; and others. The program was co-chaired by Frank Velgara, from Socialist Front of Puerto Rico, New York Committee, and Ana Marie Cardenas, law student at the City University of New York. Many of the speakers linked the impact of the Cuban Revolution to other important struggles against U.S. imperialism, especially in Puerto Rico and Venezuela.

BombaYo, a cultural group of percussionists and dancers, performed the ancestral rhythms of Bomba, an African-derived music and dance tradition developed in Puerto Rico.

In 1994 Frank Velgara agreed to coordinate work on issues affecting Puerto Rico for the Committees of Correspondence Peace & Solidarity Taskforce.[4]

In 2009 Frank Velgara was a co-chair of the Committee to Celebrate the Life of Luis Miranda Rivas.[5]

In 2012 Frank Velgara served on the Board of the Vietnam Agent Orange Relief & Responsibility Campaign.[6]

At least 500 people jammed the Malcolm X and Dr. Betty Shabazz Cultural Center in Harlem, N.Y., on Feb. 4, 2017, to pay tribute to Fidel Castro Ruz, leader of the Cuban Revolution, at an event entitled, “The Legacy Continues.” Gail Walker, executive director of IFCO (Interreligious Foundation for Community Organization)/Pastors for Peace, shared emcee duties with Malcolm Sacks of the Venceremos Brigade.

At the podium was a large photograph of Malcolm X and Fidel laughing during their historic meeting at Harlem’s old Hotel Theresa in 1960. In the meeting hall, along with the historic site’s murals of Malcolm’s life was a beautiful banner with a portrait of Fidel painted by Carlito Rovira, a former member of the Young Lords.

There was video footage of Fidel speaking at Harlem’s Abyssinian Baptist Church in 1995 and at Riverside Church in 2000. Talking about his 1960 visit to New York, Fidel recalled he had said, “I’m going to Harlem. That’s where our best friends are.”

The Honorable Anayansi Rodríguez, Cuban ambassador to the United Nations, said to audience members, “You are sisters and brothers.” She pointed out that Fidel made several trips to New York City before and after the Cuban Revolution’s triumph in 1959. The ambassador also spoke of Fidel’s love for the Rev. Lucius Walker, a sentiment which was visually displayed in a video where Fidel embraced his friend.

Rev. Walker, Gail Walker’s father, founded Pastors for Peace. He died in 2010. He had been wounded by U.S.-backed contra terrorists seeking to overthrow Nicaragua’s Sandinista government in 1988. Two people in Walker’s group were killed.

Video statements were played from South Africa, Angola and Namibia. Jerry Matthews Matjila, South Africa’s ambassador to the U.N., called Fidel “a great friend and ally.” Over 2,000 Cuban soldiers died fighting for African freedom against apartheid armies supplied by the Pentagon and Israel.

Walker recognized Nguyen Phuong Nga, U.N. ambassador from the Socialist Republic of Vietnam, who was in the audience. So was former political prisoner Sekou Odinga, a member of the Black Panther Party and the Black Liberation Army who spent 30 years in jail. Walker also acknowledged longtime Puerto Rican revolutionary Esperanza Martell, the Rev. Herbert Daughtry of the House of the Lord Church and James A. Forbes, senior minister emeritus of the Riverside Church.

Dr. Joaquín Morante, a physician practicing in East Harlem, announced that Cuba had provided a free medical education to 145 doctors from the U.S. at the Latin America School of Medicine. He was one of them. “I stand amazed at what was accomplished,” said Morante, noting that Cuba trained 20,000 physicians from over 100 countries at the school. None paid a dime.

World-renown jazz pianist Dayramir Gonzalez and violinist Taitiana Ferrer performed. Cuban-born González said that at 16 he was able to travel the world. He warned people not to get sick in the U.S. since “health care and education are not a priority,” unlike in socialist Cuba.

“Long live the Haitian and Cuban revolutions!” declared Ninaj Raoul, director of Haitian Women for Haitian Refugees. She said Haiti should have established Committees for the Defense of the Revolution like Cuba had done.

Members of Casa de las Americas courageously aided the struggle against Batista and later defended the Cuban Revolution. Luis Miranda, longtime president of CASA who died in 2007, was wounded in New York City by Cuban counterrevolutionaries. The attackers were protected by city police.

Anti-war activist Leslie Cagan, who received Cuba’s Medal of Friendship, reminded the audience that the event was being held on the anniversary of Amadou Diallo’s assassination in 1999. New York City cops fired 41 shots at the immigrant from Guinea.

Larry Hamm, leader of New Jersey’s dynamic People’s Organization for Progress, helped wind up the program with a fiery speech: “U.S. imperialism has not been able to defeat the Cuban Revolution. We must end the blockade against Cuba. … To make revolution in the United States is the greatest tribute to Fidel.”

Hamm strongly asserted, “We know the Cuban people will protect Assata Shakur,” referring to the Black revolutionary given asylum and trained as a doctor by Cuba.

In the beautiful printed program produced by the New York-New Jersey Cuba Sí Organizing Committee, Workers World Party declared: “Fidel will continue to inspire not only the Cuban people but the hundreds of millions around the world who yearn for liberation. A genuine Marxist Leninist, Fidel was able to stand up to the strongest imperialist power to create and build an independent socialist project right under the nose of the U.S.”[7]