Frank Emspak is a Madison socialist. He was director of WIN, Workers Independent News radio, was a labor educator and a shop steward at Lynn GE plant in earlier decades.

Frank Emspak is a member of Madison Democratic Socialists of America.[1]

In 2014, Frank Emspak, was listed a a friend on the DuBois Clubs Facebook page.[2]

In 1992 Frank Emspak, School for Workers, University of Wisconsin, endorsed the Committees of Correspondence national conference Conference on Perspectives for Democracy and Socialism in the 90s held at Berkeley California July 17-19.[3]

“Them and Us: An Organizing Model for Labor Communications”

In 1995 Emspak was listed[4] as one of the "CoC members and friends" donating to Committees of Correspondence. He contributed $100. 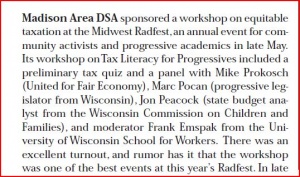 Madison Area Democratic Socialists of America sponsored a workshop on equitable taxation at the Midwest Radfest, an annual event for community activists and progressive academics in late May, 2002.

Its workshop on Tax Literacy for Progressives included a preliminary tax quiz and a panel with Mike Prokosch (United for a Fair Economy), Mark Pocan (progressive legislator from Wisconsin), Jon Peacock (state budget analyst from the Wisconsin Commission on Children and Families), and moderator Frank Emspak from the University of Wisconsin School for Workers. [5]