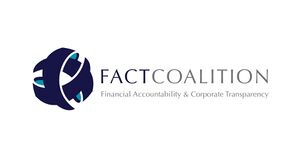 The FACT Coalition is a progressive group that "fights offshore tax abuses, promotes transparency in corporate ownership and operations, and advocates anti-money laundering policies." According to their website, "In the U.S., we are complicit in the draining of wealth of other nations and fueling the austerity movement in our own."

The FACT Coalition petitioned the United Nations in a letter dated May 24, 2020 to create the "United Nations High Level Panel on International Financial Accountability, Transparency and Integrity for Achieving the 2030 Agenda (FACTI Panel)".[1]

"The Financial Accountability and Corporate Transparency (FACT) Coalition is a non-partisan alliance of more than 100 state, national, and international organizations working toward a fair tax system that addresses the challenges of a global economy and promoting policies to combat the harmful impacts of corrupt financial practices.

"Founded in 2011 under the leadership of Nicole Tichon, who served as the coalition’s original executive director, FACT quickly grew to include a large and diverse membership. During the first gathering at the Pocantico Retreat Center in New York, the groups established the following goals."

There is untold wealth hidden in secrecy jurisdictions around the globe. The wealth-stripping from corrupt practices and regimes, illegal activity, and legal-but-ethically-bankrupt tax avoidance schemes is larger than most can possibly imagine. Because of the secret nature of the financial flows, it is impossible to know precisely the amount of money, but economist Gabriel Zucman estimates at least $7.6 trillion is in tax havens and secrecy jurisdictions. The Boston Consulting Group estimates $11 trillion. And the Tax Justice Network estimates between $21 and $32 trillion dollars.

Until the passage of the tax overhaul in 2017, the 500 largest U.S. companies had $2.6 trillion stashed offshore, costing American taxpayers over $750 billion in unpaid taxes. Indeed, the annual cost of offshore tax avoidance by multinational companies, pre-tax law, was estimated to be $94 billion to $135 billion; the non-partisan Joint Committee on Taxation estimates that the tax overhaul will increase the revenue loss to offshore tax avoidance by an additional $14 billion over the next decade. At the same time, overseas tax evasion by individuals drains an additional $35 billion to $70 billion each year from the American public.

We seek a larger conversation about how specifically certain interests are manipulating the tax system and undermining our ability to act collectively to solve problems. The secrecy, in particular, allows certain entities to play by a different set of rules than the rest of us. Internationally, the secrecy facilitates corruption and impoverishes developing countries. In the U.S., we are complicit in the draining of wealth of other nations and fueling the austerity movement in our own.

According to the FACT Coalition Website, the following individuals are on the Executive Committee.[3]

According to the FACT Coalition Website, the following individuals are staff members.[4]

According to the FACT Coalition Website, the following groups are Coalition Members.[5] Starred groups are Steering Committee members.[6]

The FACT Coalition petitioned the United Nations in a letter dated May 24, 2020 to create the "United Nations High Level Panel on International Financial Accountability, Transparency and Integrity for Achieving the 2030 Agenda (FACTI Panel)".[7] The letter was signed by Clark Gascoigne, Interim Executive Director and Erica Hanichak, Government Affairs Director.

The letter read in part:

"Increasingly, the wealth stripping practices of tax avoidance, tax evasion, and corruption are seen as leading drivers of global poverty, and financial secrecy is understood to be a significant tool in weakening democracies."

"Over the past few decades, lost revenue in the U.S. and other developed nations has led to (sometimes draconian) austerity measures. Governments have cut back on vital services, underfunding education, health services, investments in infrastructure that would spark additional economic activity, and more. In the U.S., after years of funding cuts, food assistance for low-income families now averages less than $1.50 per person per meal."

"Ending financial secrecy, closing tax loopholes, and shutting down tax haven abuse are critical levers in the effort to disrupt the status quo and fundamentally alter the way in which we approach international agreements and the economics of poverty and inequality."