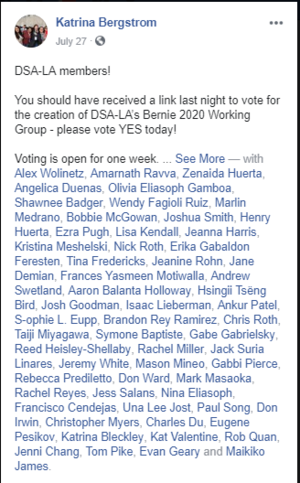 You should have received a link last night to vote for the creation of DSA-LA’s Bernie 2020 Working Group - please vote YES today!

In 2019 Evan Geary stood from AD 54 for the California Democratic Party Central Committee.

Until recently, I managed a news team whose videos reached tens of millions. We frequently highlighted left-wing activism before traditional outlets. Our algorithms detected breaking news from social media activity. I left this role to engage more directly with politics, especially environmentalism. I’ve been involved in Occupy, Bernie’s campaign, the Sierra Club and Democratic Socialists of America. I have a BFA in Film from NYU. My wife and I live in Mar Vista.[1]