Ernesto B. Vigil is from east Los Angeles. he lives in Denver Colorado.

Dec. 6 1969 Crusade for Justice, Denver Colorado conference to begin planning for national Chicano action against the war in Vietnam and the draft that eventually led to the August 29, 1970 National. Pictured are raza draft resistors at the meeting, left to right myself Rosalio Munoz of Los Angeles, Sijisfredo Aviles Chicago puertoriqueno activist who just got out of prison for resisting the draft, and Crusade activists Ernesto Vigil and Arturo Cordova 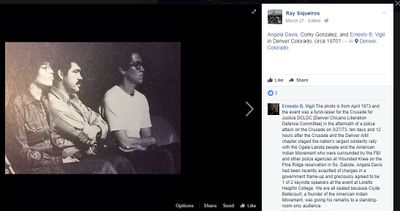 The 40th Anniversary Commemoration Committee of the Chicano Moratoriums was formed in the summer 2009 by the Chair of the National Chicano Moratorium Committee of August 29, 1970 along with two independent Chicano Movement historians whom although not of the baby boomer generation, have become inspired by the Movimiento. The organization posted a list of significant “Chicano movement” activists on its website which included Ernesto Vigil of Crusade for Justice.[1]