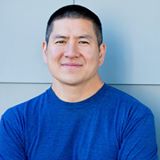 Eric Tang is Assistant Professor at The University of Texas at Austin, African and African Diaspora Studies and Center for Asian American Studies. He has been a Bronx community organizer and a Visiting Professor of History at Harvard University.

Tang has published numerous essays on race and urban social movements, including award-winning writing on post-Katrina New Orleans. Unsettled: Cambodian Refugees in the NYC Hyperghetto is his first book.

Eric Tang is a friend of Scott Kurashige.

Born, raised, and living in New York City, Eric Tang is a community organizer, teacher, and occasional scribe. Working in the Southeast Asian neighborhoods of the Bronx, he helped to found the first Asian-community-based youth organizing project in the New York City. He currently provides training and capacity building support to grassroots youth groups across the country.

— with Eric Tang at Lower East Side.

The Asian Left Forum (ALF) represented the first nationwide meeting of veteran and newer Asian American Leftists in the past couple of decades. Held on May 17, 1998, in Los Angeles, following the "Serve the People" conference on Asian American community activism, this all-day, non-sectarian meeting brought together about 100 activists, double the anticipated attendance, to "strategize radical politics in Asian communities in the United States," with a focus on the struggles of working-class immigrant communities. The ALF called for Asian American Leftists, radicals, and revolutionaries to unite, and its principles of unity identified global capitalism, imperialism, racism, patriarchal domination, and heterosexism as the root causes of oppression. Still, the forum itself focused on a progressive-to-radical agenda. Local chapters in the Bay Area, Los Angeles, and New York have, to varying degrees, continued the work, organizing forums on anti-imperialist struggles in Asia, including Okinawa, Korea, the Philippines, East Timor, and Burma; the Kosovo war; the prison industrial complex; and the role of electoral politics in revolutionary organizing. While the ALF is comprised of diverse membership in terms of age, activist experience, political ideology, gender, ethnic background, and geographic location, the active core is predominantly twenty-something. Jung Hee Choi, Alyssa Kang, Sun Lee, Eric Tang, and Ryan Yokota sat on the National Planning Committee. A second national meeting was planned for early 2000. [1]

Good times, being back in NYC earlier this week to celebrate the anniversary of Mekong NYC. If you weren't able to make it, you can still support this one of a kind group organizing the refugee neighborhoods of the Bronx: