Emma Lozano is married to Walter Coleman. She is the sister of the late Rudy Lozano.

Emma Lozano got her start in organizing in the 1970s with Chicago's independent Latino political movement. She founded Centro Sin Fronteras in 1987 to defend the rights of undocumented Mexican immigrants. At the same time, Pueblo Sin Fronteras began organizing neighborhood residents, using hunger strikes and demonstrations to win construction of the city's first community-based bilingual school. Ever since, Sin Fronteras has played a leading role on issues ranging from school reform to legalization of the undocumented to getting the U.S. Navy out of the Vieques, Puerto Rico[1]. 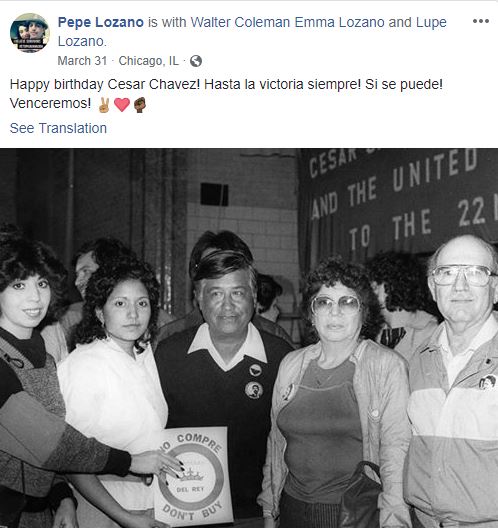 In 1998 Bobby Rush was busy preparing for a tilt at the Chicago mayoralty.

In 1994 Emma Lozano, Chicago, was listed on a "Membership, Subscription and Mailing List" for the Chicago Committees of Correspondence, an offshoot of the Communist Party USA[3]

In 2000, Emma Lozano served on the welcoming committee for the Chicago Memorial Service for Richard Criley, a long-time activist with the Communist Party USA and a leader of the Chicago Committee to Defend the Bill of Rights.[4]

Emma Lozano's spoke to the thousands of marchers for immigrant rights in Grant Park, July 19 2006. "I'm here to ring the bell for an immediate moratorium on deportations and the raids and sanctions on employers." The founder of Pueblo Sin Fronteras had just helped to lead over 20,000 on a three and a half mile march in 90-degree heat. The event was a continuation of the mobilizations for immigrant rights begun this spring by Chicago's March 10th Movement.

The bell she referred to was a replica of the one that rang to start the Mexican revolution nearly 200 years ago. It was carried on the back of a pick-up truck through the streets in the middle of the crowd. Connie Parra and Victor Parra, members of Local 73 Service Employees International Union (SEIU), brought it to Union Park that morning.

Congressman Luis Gutierrez addressed the rally, condemning the raids on immigrants that are being carried out by the Department of Homeland Security, through its Immigration and Customs Enforcement arm. "President Bush can't have it both ways. He can't claim to favor legalization for the undocumented immigrants on the one hand, and then carry out raids, deporting workers and breaking up families."

Jose Artemio Arreola, a co-chair of the March 10th Movement, was present at the rally as well. The coalition of local organizations has recently announced plans for a national conference to be held in Chicago Aug. 11-13. This conference will be devoted to continuing the struggle. "We don't support any of the bills in Washington," commented Arreola, "but we want the politicians to listen to us. We will tell them what the people need: No deportations, no guest worker program and legalization for all. After we have that, we need a visa procedure that grants immigrant workers full labor rights."[5]