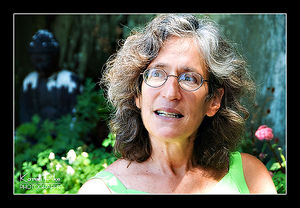 Ellen David Friedman is a Vermont activist. She is married to Stuart Friedman. She is a retired organizer for Vermont NEA and a member of the Labor Notes board.

Ellen David Friedman was born in New York City in 1952 and graduated from Harvard University in 1974. After moving to Vermont as a full time resident in 1974, she held positions with the Vermont Alliance, Chelsea Country Store, United Electrical Workers Union, and the American Federation of State, County, and Municipal Employees (AFSCME). Between 1986 and 2007 she was been employed by Vermont - NEA (National Education Association). She was a founding member of the Rainbow Coalition of Vermont in 1984 and was a member of its first steering committee. She was also elected National Committeewoman for the Vermont Democratic Party in 1984. She was active in efforts to elect Jesse Jackson president of the United States in 1988 and Bernie Sanders governor of Vermont in 1986 and U.S. Congress in 1988.[1]

In the late 1970s, Ellen David Friedman was a member of the New American Movement.

In 1986 Ellen David Friedman of Vermont was on the Credentials Committee at the Founding Convention of the National Rainbow Coalition.[2]

In the mid 2000s, veteran Vermont activists Ellen David Friedman and Stuart Friedman taught community organizing to university students in southern China while also quietly working with labor groups not sanctioned by the communist government. In 2007, the East Montpelier partners left their respective Green Mountain jobs — Ellen as an organizer for the Vermont teachers’ union and as vice-chair of the Vermont Progressive Party, Stuart as a clinical social worker at Central Vermont Hospital — in order to focus more intensively on their work in the People’s Republic. Their ambitious aim is to help mitigate the negative effects of the global market economy model espoused by Gov. James Douglas and the Vermont business leaders who recently concluded a joint prospecting trip to China.[4]

My fond hope is that I can work with people in trade unions and share my experiences in Western labor-organizing practices and collective bargaining,” David-Friedman says. Ellen, 55, and Stuart, 59, will return in August to the Pearl River Delta region where they have lived for a few months each year since their son, Eli Friedman, began studying Chinese there in 2000. The couple received faculty appointments in Guangzhou University’s social work department a couple of years ago because “social work is a new field in China and there was a need for foreign teachers,” David-Friedman explains. The couple will return to Vermont next February.

Though organizing comes easy to the diminutive, irrepressible David-Friedman, she regards the present period as among the worst of times in terms of workers’ movements. Still, that’s no reason to despair, she says, citing the axiom of 19th-century Italian Marxist Antonio Gramsci: “Pessimism of the mind, optimism of the will.”

Not long after visiting Eli for the first time, David-Friedman got involved with small independent groups that were raising money in Hong Kong to support efforts to improve working conditions in the People’s Republic. These grassroots Chinese organizers work cautiously outside the aegis of the government-controlled All China Federation of Trade Unions to try to enforce minimum-wage guarantees as well as occupational safety and health standards.

As a labor organizer from the world’s leading capitalist country, she gently prods her students to ask questions about the direction taken by a society founded on principles of economic equity. David-Friedman notes ruefully that most of the students say they have little use for the Marxist worldview that she regards as essential to understanding history and politics. China’s unconditional embrace of the private market has made socialist theory seem irrelevant to many Chinese. “The state is presumed not to be challengeable,” David-Friedman observes. “The state is considered to have full responsibility for making decisions about the country’s economic development — which is really a way of saying its move to marketize everything.”

It was this grand vision, along with the day-to-day excitement of teaching and organizing in China, that led David-Friedman to leave her 20-year-long job with the Vermont chapter of the National Education Association. Her absence will be sorely felt, says Vermont NEA director Joel Cook. He says her “key achievement” was organizing hundreds of support staffers in the state’s public schools. “Ellen brought a unique perspective to the work of this association,” Cook comments. “She is unrelenting in her dedication to the interests of working people and issues of social justice.”

Similarly, in her leadership roles with the Progressive Party, David-Friedman gets major credit for electoral gains outside the Burlington area.

In 2007 Ellen David Friedman raised funds for and organized a three-week speaking tour of the United States by Liu Cheng, a Shanghai scholar and a principal architect of the government-backed labor-reform legislation.

Cheng had denounced an arm-twisting exercise by American and European corporations that had already succeeded in weakening the proposed reforms. Cheng accused Western business associations based in Shanghai of impinging on China’s national sovereignty by implying they might move their investments to a more pliable Asian country, such as Pakistan, if wages and workers’ protections were elevated in Chinese factories.

The whirlwind U.S. tour, which included more than 40 meetings with trade union leaders and government officials, “had quite an impact,” David-Friedman recounts. She says Cheng was subsequently able to help prevent further dilution of the proposed reforms because he could plausibly argue that his hang-tough position enjoyed support in sections of American society.

David-Friedman points to the Chinese government’s move to improve working conditions as one reason why she feels “empathy” for the People’s Republic. China meets some of the standards for a socialist nation, she says. And China does not conform to many Americans’ depiction of it as a monolithically repressive and exploitative state. “Sure, there are sweatshops” and strict limitations on individual freedom, David-Friedman concedes. But there’s much more to China than that, she adds. Communist Party apparatchiks and overseers at Guangzhou University have never attempted to censor her or Stuart’s teaching, David-Friedman points out. “We can say anything we want to in the classroom,” she notes.

But China’s communist revolution has gone off the rails, David-Friedman adds. The party “has divorced itself, tragically, from allowing itself to be led by the needs of workers,” she adds. But maybe, in some small measure, these Vermont Progressives can help put the world’s largest country back on the track toward socialism.[5]

On May 1 2008, Ellen David Friedman, Founder of the Vermont Workers Center and former VEA Staff Member signed an open letter to SEIU president Andy Stern in protest at SEIU move to force its local United Healthcare Workers into trusteeship.

"We are writing to express our deep concern about SEIU's threatened trusteeship over its third largest local, United Healthcare Workers (UHW). We believe that there must always be room within organized labor for legitimate and principled dissent, if our movement is to survive and grow. Putting UHW under trusteeship would send a very troubling message and be viewed, by many, as a sign that internal democracy is not valued or tolerated within SEIU. In our view, this would have negative consequences for the workers directly affected, the SEIU itself, and the labor movement as a whole. We strongly urge you to avoid such a tragedy."

In 2009 Ellen David Friedman, Vermont Workers Center was a member of the Labor Notes policy committee[7]. 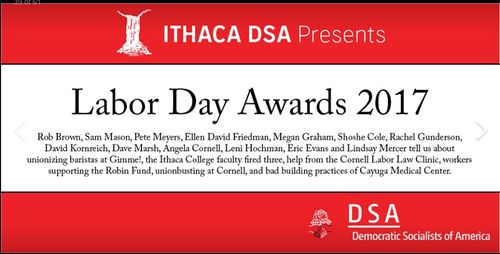 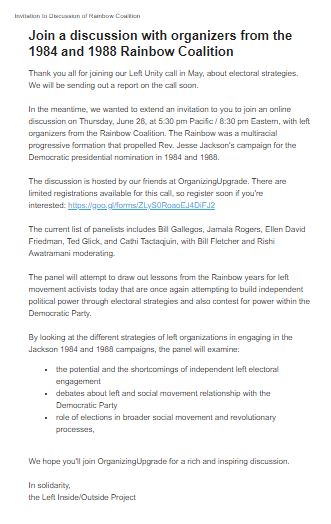 Thank you all for joining our Left Unity call in May, about electoral strategies. We will be sending out a report on the call soon.

In the meantime, we wanted to extend an invitation to you to join an online discussion on Thursday, June 28, at 5:30 pm Pacific / 8:30 pm Eastern, with left organizers from the Rainbow Coalition. The Rainbow was a multiracial progressive formation that propelled Rev. Jesse Jackson's campaign for the Democratic presidential nomination in 1984 and 1988.

The discussion is hosted by our friends at Organizing Upgrade...

The panel will attempt to draw out lessons from the Rainbow years for left movement activists today that are once again attempting to build independent political power through electoral strategies and also contest for power within the Democratic Party.