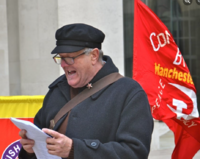 Northwest District conference of the Communist Party of Britain, October 2022. 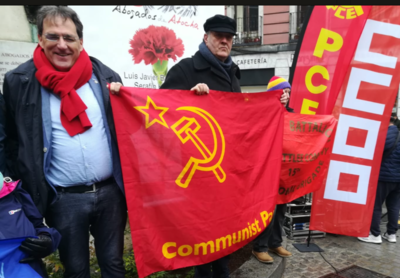 Eddy Redmond and Kevan Nelson represented the Communist Party of Britain in Madrid January 2020 alongside the PCE (Communist Party of Spain) to commemorate the Atocha massacre in the city 43 years ago, and the 1939 execution of the "Thirteen Roses", who were women of the Unified Socialist Youth (JSU) and PCE fighting against Franco during the Spanish Civil War.

January 24th 1977, in an office located on 55 Atocha Street near the Atocha railway station in Madrid, specialists in labour law, members of the Workers' Commissions (Comisiones Obreras, CCOO) trade union, and of the then-clandestine Communist Party of Spain (PCE) had gathered.

Armed with Ingram M-10 sub-machine guns, three assassins entered the building looking for Communist leader Joaquin Navarro, head of the CCOO's Transport Syndicate, which had recently called for a strike against the "Franquist transport mafia", denouncing the Sindicato Vertical official trade union. Failing to find him, they decided to open fire on those present, killing five and injuring four.

On the morning of August 5th 1939 thirteen women were shot dead against the walls of the Eastern Madrid Cemetery. Nine were minors, because at that time the age of majority was not reached until twenty-one. Ranging in age from 18 to 29 they were charged with being involved and conspiring against the “social and legal order of the new Spain".[1] 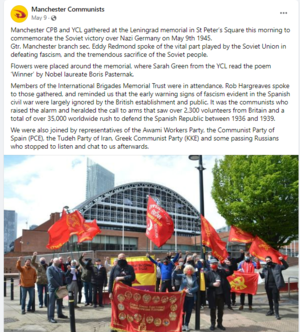 Manchester CPB and YCL gathered at the Leningrad memorial in St Peter’s Square May 9 2021 to commemorate the Soviet victory over Nazi Germany on May 9th 1945.

Gtr. Manchester branch sec. Eddy Redmond spoke of the vital part played by the Soviet Union in defeating fascism, and the tremendous sacrifice of the Soviet people.

Flowers were placed around the memorial, where Sarah Green from the YCL read the poem ‘Winner’ by Nobel laureate Boris Pasternak.

Members of the International Brigades Memorial Trust were in attendance. Rob Hargreaves spoke to those gathered, and reminded us that the early warning signs of fascism evident in the Spanish civil war were largely ignored by the British establishment and public. It was the communists who raised the alarm and heralded the call to arms that saw over 2,300 volunteers from Britain and a total of over 35,000 worldwide rush to defend the Spanish Republic between 1936 and 1939. 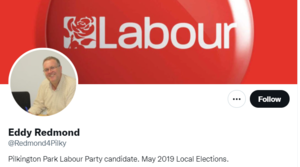 Eddy Redmond was a Pilkington Park Labour Party candidate in the May 2019 Local Elections.