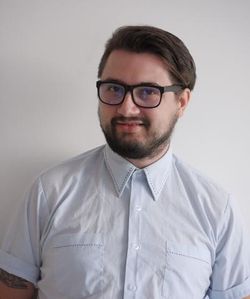 Dylan Eugene Petrohilos is a D.C. based anti-capitalist activist who was arrested in April 2017 for his involvement with anti-Trump anarchist group DisruptJ20, which has rebranded "into two activist hubs: WeDisrupt & ResistThis!."[1]

According to his personal website, Dylan Petrohilos is "a graphic designer, storyteller, and activist based in Washington, DC." He writes:

Help DC Activists Replace Stuff!
A since-removed[4] GoFundMe account was created to assist Dylan Petrohilos with expenses related to his DisruptJ20 arrest. An announcement was mass mailed on April 3, 2017.[5]

The text of the email was as follows:

According to the search warrant, the raid was in furtherance of "the investigation into the conspiracy to riot" and to search for items associated with the "Black Bloc march on January 20, 2017".

Among the items taken were cell phones, computers, and irreplaceable personal belongings. The known activist's home was targeted because MPD believed he was in possession of the equipment used to organize and support the protests.

Due to this miscarriage of justice, we are asking for solidarity from the community at large to help replace the thousands of dollars worth of computers and other electronic equipment seized.

Can we count on your support?" 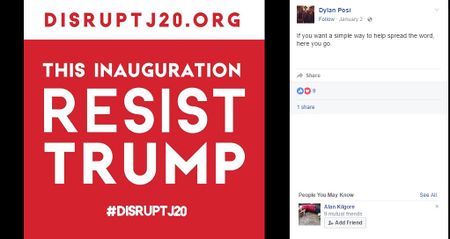 Dylan Petrohilos marked his interest in the Checkpoint Planning Call, a nationwide conference call organized by self-proclaimed anarchist group DisruptJ20. The call occurred on Thursday December 29 2016 with the goal of disrupting the 2017 inauguration of President Donald Trump.[6]