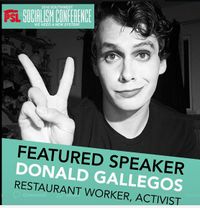 Donald Gallegos is openly gay, Tewa/Hopi from the Pueblo of Ohkay Owingeh. He became involved in the movement after the murder of James Boyd by Albuquerque Police Department in 2014. That same year Donald met the Party for Socialism and Liberation through the 2014 Southwest Socialism Conference, hosted at N’MPower, where he was doing volunteer work in HIV/AIDS prevention and awareness.

Donald has written on nuclear waste storage and the crisis of overproduction of nuclear waste. Donald speaks out against war, the agitation for war by the major parties, and the racist narrative “progressive” media puts out.

Donald is a proud member of the Party for Socialism and Liberation. "[1]