Labor leaders, grass roots activists, elected officials and young people crowded into the New Haven People's Center Dec. 7 with energy and enthusiasm to “Push Bush out the door in 2004!” The occasion was a reception celebrating the 84th anniversary of the Communist Party USA, hosted by the PWW in Connecticut.

A miniature of the Amistad statue “Make Us Free” was presented to each of five leaders on the front lines of the grassroots movements to defeat George Bush and the right wing in the 2004 elections and win economic justice, equality and peace. As each recipient expressed their appreciation and solidarity, the strength of the recent strike at Yale and struggles to open jobs to Latino workers, the fight to save jobs at Pratt & Whitney, the Immigrant Workers Freedom Ride, and vigils for peace filled the room with hope and optimism.

Keynote speaker Denise Winebrenner Edwards, member of the Borough Council in Wilkinsburg, Pa., detailed the pain and suffering in her community and called for the defeat of the Bush administration. “The Bush administration is not just an obstacle to achieving peace, but is aggressive in waging war,” she said, calling for maximum unity to win peace, living wages, health care and senior security.

The City of New Haven Peace Commission is an organ of the City of Hartford Connecticut. It was organized in the 1980s by Communist Party USA leader Alfred Marder and has been infiltrated by local communists ever since.

Over 50 people gathered Sept. 24, 2011, at the New Haven People's Center for a "Youth Jobs Roundtable," where high school students, leaders of student organizations, local politicians, community organizations and labor organizers put their heads together to launch a campaign for good jobs for youth in New Haven.

The president of the Black Law Students Association at Yale, Alderwoman Dolores Colon from New Haven's Sixth Ward, a representative from Connecticut Students for a Dream and labor leaders from AFSCME and the teachers' union were all in the room.

Nollysha Canteen and Sabir Abdussabur, both high school student leaders, MC'ed the event. Several youth, including Abdussabur, gave testimonies from the front of the room. Joelle Fishman of the New Haven Peoples' Center gave a keynote speech, providing hope and a rallying cry to support Obama's American Jobs Act and Jan Schakowsky's Emergency Jobs to Restore the American Dream Act, pointing out that these bills could create over 5,000 new jobs for youth in Connecticut.[4] 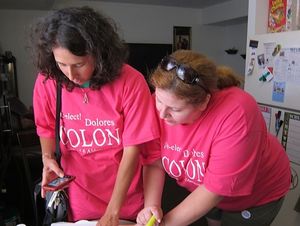 In September 2011, in New Haven's The Hill’s Ward 6, three women were trying to get voters out for incumbent alderwoman and Local 34 member Dolores Colon in the Church Street South housing complex, a privately owned complex of 301 federally subsidized apartments across from Union Station. The volunteers were Young communist League leader Lisa Bergmann, a former Connecticut Center for a New Economy organizer; Esther Martinez, who has lived in Church Street South for six years; and Jisette Chona. “I’ve lived here since I was 17,” Chona, 37, said. “I got married and moved out. I got separated and moved back in.”

According to Bergmann, Alderwoman Colon had been instrumental in pushing for residents’ participation in the plans for the complex and in trying to assure that current residents will have a chance to live in the new buildings. That made Church Street South a critical site for Tuesday’s get-out-the-vote drive.

“There are 100 people we want to pull out of here today so we need to hunker down and focus,” Bergmann said to Martinez and Chona as they tromped through the dingy cinder-block complex painted in various ugly shades of tan. Only a few straggly trees interrupted the blacktop pathways. Chona’s smiling 4-year-old daughter was in tow.[5]

When New Haven Mayor Toni Harp declared Feb. 23, 2014 as "Craig Gauthier day in the City of New Haven," the overflow crowd at the Peoples Center burst into cheers.

After leading a youth march to end violence and for jobs with Gauthier, the Mayor read her proclamation to this "courageous union and community leader in our State," noting his journey from Louisiana to New Haven, leading his union and in "the Communist Party USA, where he has campaigned for peace, to end police brutality, meet the needs of youth, to create living wag jobs in the community and for union rights."

Before presenting his life story, Gauthier received additional citations from Rep. Gary Holder-Winfield, elected two days later to fill the state senate seat vacated by Harp; Ald. Dolores Colon, chair of the Black and Hispanic Caucus of the Board of Alders, John Harrity, president of District 26, State Council of Machinists, Jarvis Tyner, executive vice chair of the Communist Party USA, and a poem by Baub Bidon.[6]

New Haven Mayor Toni Harp announced her bid for a second term at a campaign kickoff event on a Saturday in early May 2016..

The kickoff, held at Edgewood Park, was attended by community members as well as representatives of New Haven at the state and federal levels. Sen. Richard Blumenthal LAW ’73, Sen. Chris Murphy, Congresswoman Rosa DeLauro and state senate President Pro Tempore Martin M. Looney each endorsed Harp, underscoring her commitment to bolstering youth services in the city. In her remarks, Harp spoke of the city’s progress in reducing crime, bettering public schools and creating new jobs as strengths of her administration. The campaign’s office will open on June 6 at 940 Whalley Ave.

“I’m excited. I’m joyful. And I’m proud to announce that I’m running for a second term for mayor,” Harp said.

Several city officials, including Hill alder Dolores Colon ’91, have noted that Harp is the leading candidate in the race, but Murphy said city residents should still vote on Nov. 3.

“This is as important as it gets,” he said. “It’s up to everyone here … to take nothing for granted in this election.”[7]