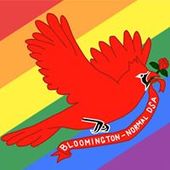 BloNo DSA returned to in-person meetings with a virtual option this month! For those who couldn't make it, we reflected on the importance of personal & collective wellness & celebrated the newly elected & appointed leaders:

“With AFROSOC, I see it as a way that we can move forward to actually improve the community through community-based activities and a community-based focus on giving the people what they’re asking for,” said Anthony Overton, a founding member of the caucus.

The caucus, which was part of a national DSA initiative, was established this spring. It stands independently from the local DSA chapter but has access to all of the DSA’s resources, “just as a space for socialists of color that are members to have their own organizing space pretty much and feel safe within that community,” said Sonny Garcia, one of the caucus’s volunteer organizers.

“For the next six to 12 months, we’re just going to be focusing on base building and we’re going to be doing that through community outreach events like we had Saturday … followed by political education,” Garcia said. “It’s definitely not an overnight process. This is going to take years to really honestly build this organization to have the capacity to have the power to influence our local elected officials to pass laws and ordinances or what have you that actually help the people in the community.”

Overton said the main reason he was interested in AFROSOC even though he is not a Bloomington-Normal DSA member was because he hopes to engage with members of the community who have become disenfranchised with the political system.

“At the end of the day, regardless of who somebody supports, I just simply want people to make educated informed choices,” he said, noting the caucus’ focus on political education. “The political process is confusing at best and terribly muddled at worst. … I think we can help out low-income communities understand the political process and help improve the quality of their lives in their areas.”[1]

Bloomington-Normal DSA (of which Illinois State YDSA is affiliated) is competing for a majority on the Bloomington City Council as well as the mayorship in the upcoming elections. [2]

In 2020 Rachel Shively and Cecelia Long were co-chairs of Democratic Socialists of America Bloomington-Normal. 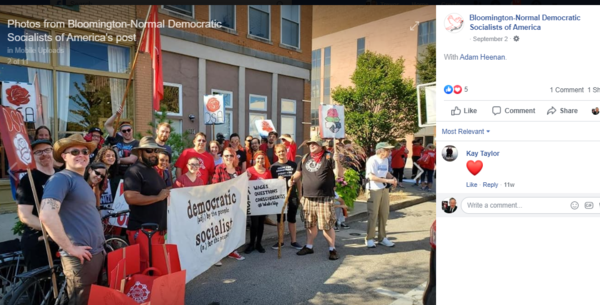 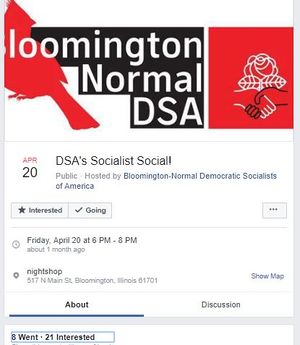 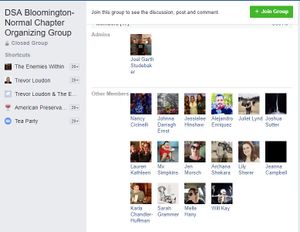