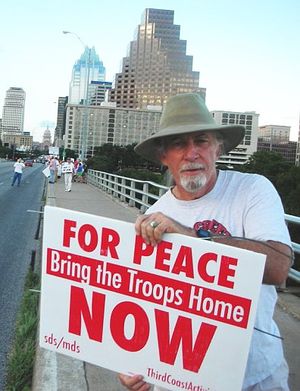 David Hamilton is a member of the Austin Texas branch of the Democratic Socialists of America. 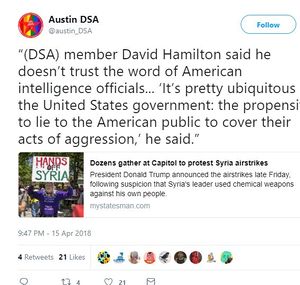 Ryan Pollock, Rodney Florence, Adrian Boutureira and James Cole demonstrates against the U.S. airstrikes in Syria at a protest at the Capitol on Aril 15 2018.

Drivers, with their car horns and thumbs-ups, encouraged about 50 protesters at the south entrance of the Capitol grounds Sunday afternoon condemning U.S.-led airstrikes on Syria.

President Donald Trump announced the airstrikes late Friday amid suspicion that Syrian President Bashar Assad had used chemical weapons against his own people in a rebel-held area near the nation’s capital. The attack reportedly killed at least 40 people. Syria has been in a civil war for seven years.

“No justice, no peace; U.S. out of Middle East,” and “One, two, three, four, we don’t want your racist war; five, six, seven, eight, Syria’s a sovereign state,” were some of the chants protesters hurled toward traffic and pedestrians where Congress Avenue meets 11th Street downtown.

The United States, Britain and France unilaterally and illegally struck sites in Syria, and did so without proof Assad was responsible for the chemical weapons attack, said Adrian Boutureira, one of the founding members of the Austin chapter of No War With Syria and a leader in the Travis County Green Party.

Democratic Socialists of America member David Hamilton said he doesn’t trust the word of American intelligence officials, citing the Iran-Contra affair, the lack of evidence of Iraq having weapons of mass destruction after the U.S. invaded for that reason and the allegation that former National Intelligence Director James Clapper lied under oath before Congress when asked if the National Security Agency collects data on Americans in the United States.

David Durbin, a member of Austin Anti War and No War With Syria Austin, said he’s skeptical about the narrative used to warrant airstrikes.

“I think there was a chemical attack,” he said. “I don’t think we have evidence about who did it.”

Even if Assad was responsible, American involvement in the civil war will make matters worse, he said.

“It’s just going to drag on the killing of civilians and the war,” Durbin said.

Protester Amina Choudhury said American involvement is “very messy.” The United States conducted airstrikes almost exactly one year ago Friday because of a chemical attack, yet Assad is still in power, and the rebels are losing the war, she said.

Trump wanted to send a message to Assad with the airstrikes, but “there is no message being sent,” Choudhury said.

In the late 2000s, Thorne Dreyer and David Hamilton were very active Movement for a Democratic Society members and made their Austin Texas branch, one of the most active in the US. 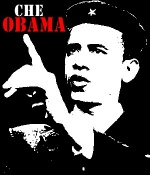 Excerpts from Hamilton and Dreyer's The Rag Blog 23rd March 2008 (graphic in the original)[2];

In 1936, the French Communist Party ended years of conflict with the French Socialist Party and established a united front that elected Leon Blum as the first socialist prime minister of France. That united front passed reforms that have characterized the socialist aspect of French society ever since.

I am not a Democrat. I have not voted for the presidential nominee of the Democratic Party since 1972 and have not participated in their primary process since the Jackson campaign of 1988.

I support Barack Obama enthusiastically. I do not do so because I don’t find things to criticize in what he says. I do so because, to a much greater degree than any other major party politician, I trust him. I trust him to do what he promises and talk to our supposed “enemies” instead of threaten them. In that, there is the kernel of the rejection of the militarism that is intrinsic to U.S. imperialism...

I expect to be disappointed. I expect to have to criticize him and exert pressure on him from the left. I also expect him to make statements in order to get elected that I disagree with. But this time, I see a chance for a transformational figure who might just change the course of U.S. history and I’m taking that chance...

Purists who reject him have no alternative other that “build an anti-imperialist movement." That is a false dichotomy. In November, hopefully you will have the opportunity to vote for Barack Obama for president. The ideal anti-imperialist won’t be on the ballot. Relate to that reality. He may disappoint somewhere along the way, but he is by far the best major party candidate I’ve ever seen.

In 2008 David Hamilton of Austin MDS, Austin, TX signed an online petition “A Open Letter to Barack Obama on Iran”.[3]

In 2009 David Hamilton, Movement for a Democratic Society, Austin Texas, was listed as a signer of the Progressives for Obama website.[4]

In 2010 David Hamilton was listed as a contributor to the Movement for a Democratic Society linked, Austin Texas based, The Rag Blog website.[5] 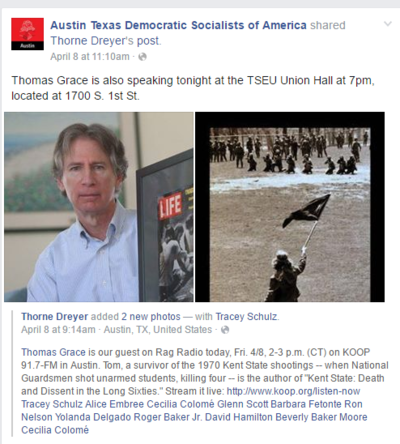 Thomas Grace is our guest on Rag Radio today, Fri. 4/8, 2-3 p.m. (CT) on KOOP 91.7-FM in Austin. Tom, a survivor of the 1970 Kent State shootings -- when National Guardsmen shot unarmed students, killing four -- is the author of "Kent State: Death and Dissent in the Long Sixties." Stream it live: