David Clendon is a New Zealand Member of Parliament. 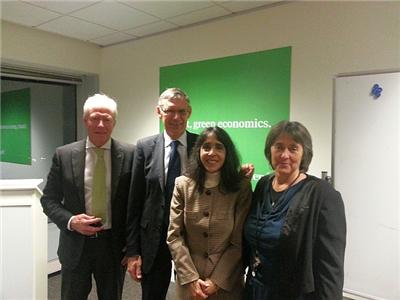 Wellington, 16th of May 2013. Invited by a group of representatives of the Green Party in Parliament, The Ambassador of Cuba, Maria del Carmen Herrera Caseiro, held a cordial and fruitful exchange with MPs Catherine Delahunty, David Clendon, Kennedy Graham and Steffan Browning that lasted around one and a half hours.

The meeting, which took place at the houses of Parliament, was an occasion to expound at length on the reality of Cuba, with the interest shown by the hosts on many different issues related to the country.

Addressed among others were issues of updating the Cuban economic model, organic agriculture, the results of the recent presentation of Cuba to the Universal Periodic Review mechanism (UPR) of the Human Rights Council, the composition and functioning of the Cuban Parliament and the electoral system, Cuba's cooperation with other countries, particularly in the Pacific, the U.S. blockade against Cuba, the case of the Cuban Five, Cuba's relations with Latin America and New Zealand, etc.

After the meeting the Cuban diplomat gave them notice of the 9th International Convention on the Environment and Development to be held between the 8th and 12th of July this year, and encouraged them to participate in the event.[1]