Cynthia Peters is a LeftRoots Cadre Member. She is also a City Life/Vida Urbana volunteer in Massachusetts.[1] 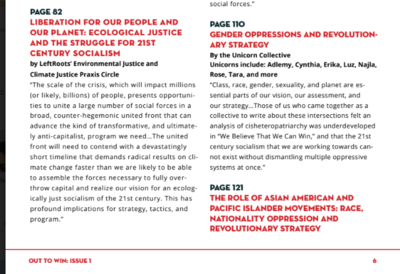 DUMP TRUMP, DEFEAT RACISM AND MISOGYNY, BUILD THE LEFT was an open letter to the left from 47 grassroots organizers. October 17, 2016.

A lot of us see something really clearly, but few of us—radical and revolutionary organizers—are willing to say it out loud.

So we’re going to say it. Defeating Trump in the presidential election is a top priority for the left. And at a minimum, that means mobilizing voters for Hillary Clinton in swing states even if you vote for another candidate in a safe state. We’ve got to beat Trump and Trumpism while building movements that will fight, resist and disrupt a Clinton administration that will be militaristic and pro-corporate...

As we mentioned at the beginning, defeating Trump is not enough. We need movements strong enough to fight a Clinton administration on several fronts—whether Israel/Palestine, free trade agreements, climate change, a $15 minimum wage, or the prison-industrial complex. And neutralizing the appeal of the far right means we need to both strengthen our movements for racial justice and win over white workers to a progressive class politics as an alternative to Trump’s racist economic nationalism. Finally, we need to build a left that can help anchor a visionary alternative to corporate Democrats. It won’t be easy, but we’ve come this far. Let’s defend what we’ve got in this election, and keep our eye on collective liberation.