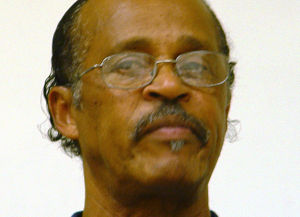 Craig Gauthier is a Connecticut activist.

Born and raised in Louisiana, he first came to New Haven in 1966, just out of the military. “To me, New Haven was the most exciting place to be, politically.”

From 1966 until 1970, he worked mornings at Yale New Haven Hospital and the 3-11 shift at Pratt and Whitney in North Haven. He became interested in the Black Panther Party and volunteered with their children’s breakfast program and helped to administer its clothing distribution program: “We had garages on Sylvan Avenue and Orchard Street where people could go” to pick up clothing. In 1967 and 1968, he helped organize housekeeping workers at Yale New Haven Hospital and met members of the Communist Party USA who worked alongside Local 1199 organizers. He “was pleased to meet progressive union people.” He joined the Communist Party USA in 1970.

He went home to Louisiana in 1970 to care for his ailing mother. “In many places in Louisiana at the time, there was still ‘Jim Crow’ stuff going on.” While there, he helped start the Young Workers Liberation League, which worked with the Meat Cutters Union “trying to organize plantation workers…We took people to Washington to testify about [being] locked in to the plantation lifestyle.”

He came back to the city in 1973, first getting a job as a machine operator at another company, but then went to work at Winchester in the Barrel Shop. At the same time, utilizing his Veterans’ Benefits, he attended South Central Community College: “I went to school full time and worked full time from 1973 to 1976. I loved it because it fit into my political work.”

Working with Local 609 “When the union came in, a lot of changes took place, slowly…I loved 609 because [it] had a strong presence in the Central Labor Council and in the state of Connecticut. The Machinists Union was a progressive union even though some of the leaders [were not.] 609 to me was very powerful…With 1800 workers…you bring a lot of votes [to the table and] you can move things.”

He eventually became Shop Steward for the Barrel Shop, then Assistant Chief Steward and finally Chief Steward. He became president of Local 609 in the late 1980s. “What I did to prepare for the presidency was I studied the history [of the union.] I give the initiators a lot of credit.” His greatest aspirations as president were to “be able to implement the High Performance Work Organization” [plan]“and also to get more workers actually involved in union business…We had to participate at the state level [as well], and Black members had to be involved in that.”

At Winchester, the union initiated the celebration of Martin Luther King Day every year. “The union had a certain power for the company to shut down production from 2 to 3 p.m.”

The union also started the Winchester Fund, whereby members donated money out of their paychecks to organizations such as the Dixwell Community House, the United Way and “Rev. Bonita Grubbs’ organization,” Christian Community Action. About $60,000 was donated to community groups.

Greatest challenges as Local 609 President: “I was not always confrontational (although some people might disagree) but I was not going to let [the company] violate the contract.

“The biggest problem I had [among the membership] was the trades-people because they always felt they should get all the gravy…The company would play [them] off against the machine operators…The most senior people were white men.”

“Winchester was a family. People knew each other. [It] was a place where young people could see people going to work, and leaving work talking to each other. I liked going to work. Winchester was an integral part of the community, and the people who worked there were respected: ‘Those are special workers who keep a plant running 24 hours a day, seven days a week.’”[1]

In the early 1990s, Craig Gauthier was involved with the Connecticut Communist Party USA

At the 2006 People’s Weekly World annual May Day celebration, Connecticut AFL-CIO President John Olsen recalled that only two years ago Connecticut Labor Against the War was awarded the Connecticut PWW’s Newsmaker Award. This, he said, contributed to the dialogue that resulted in adoption by the state and national AFL-CIO of strong resolutions against the Iraq war.

Olsen spoke at the May 7 celebration, where he accepted the Newsmaker Award on behalf of the Connecticut AFL-CIO. “It is in rooms like this where things begin to happen,” Olsen said.

Also at the event, the Winchester Citizens Ad Hoc award was accepted by Craig Gauthier and several other workers from the recently shut-down U.S. Repeating Firearms Plant . The group vowed to keep the struggle going and to keep city officials on their toes to find another manufacturing buyer, making sure that former workers have the opportunity to be hired with union representation.

The Hartford Young Communist League’s Rap Group had everyone in the room rocking and clapping. The event raised over $2,000 for the People’s Weekly World 2006 fund drive.

This fight for justice has stirred up a powerful coalition of real grassroots organizing, Joelle Fishman, chair of the Connecticut Communist Party USA, told the PWW gathering.[3]

Cheap imports from China carried a high price for 186 members at the iconic Winchester rifle facility after parent company US Repeating arms closed the New Haven plant on March 31, 2006.

Former Winchester workers spoke out at a Connecticut AFL-CIO rally in support of an unfair trade practices petition filed by the AFL-CIO to force the Bush Administration to take action against China’s violation of workers’ rights. Those violations, including slave-labor conditions and extensive use of child labor, give China an unfair competitive advantage and cost millions of North American jobs. Under the Trade Act of 1974, the U.S. has the ability to take action against China, but the Bush Administration has refused to do so.

“March 31 was a very sad day; 186 jobs, that’s 186 families,” Local 609 President and 40-year Winchester employee John Reynolds told the New Haven Register. “We are looking for our representatives in Washington D.C. to do something.”

"The closure of the Winchester plant was a blow to both the generations of workers who were the backbone of the plant as well as the surrounding community," DeLauro said. "Yet, the closure of this New Haven institution represents something much bigger — it is a symbol of the Bush Administration’s failed trade policies and its impact on families right here at home."[4] 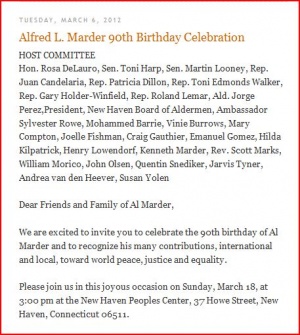 A statement issued on the committee's behalf read;[5]

We are excited to invite you to celebrate the 90th birthday of Al Marder and to recognize his many contributions, international and local, toward world peace, justice and equality.

August 25, 2012, a "group of veterans" called on Governor Dannel Malloy to restore the request for funding for restoration of 37 Howe Street, site of the Communist Party USA's New Haven People's Center.

The Governor removed the item from the state bonding budget after an opposition group from outside New Haven, citing their veteran status, protested the proposed funding on the grounds that Communists are part of the building. The bonding request would restore brick work on the 1851 Italianate structure which is a site on the Connecticut Freedom Trail.

The announcement was made as the New Haven Peoples Center celebrated its 75th anniversary with a family backyard cookout and cultural event including music and children's crafts. After supporters crowded on the front lawn for a group photograph, messages of solidarity and support were delivered by elected officials, labor leaders and community activists.

The letter from the veterans reads in part: "We deplore the manipulation of a few Veterans, for narrow political purposes, who do not understand that the New Haven Peoples Center is an historic building,

We call for the restoration of the request of the New Haven Peoples Center for funding.

When New Haven Mayor Toni Harp declared Feb. 23, 2014 as "Craig Gauthier day in the City of New Haven," the overflow crowd at the Peoples Center burst into cheers. 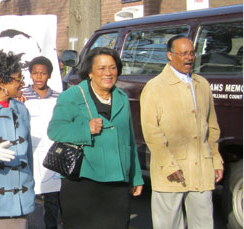 After leading a youth march to end violence and for jobs with Gauthier, the Mayor read her proclamation to this "courageous union and community leader in our State," noting his journey from Louisiana to New Haven, leading his union and in "the Communist Party USA, where he has campaigned for peace, to end police brutality, meet the needs of youth, to create living wag jobs in the community and for union rights."

Culminating two and a half years of youth organizing, the New Elm City Dream and the Young Communist League led the march with police escort. Over one hundred youth and elected officials, union and community leaders marched from Elm and Kensington streets where Tyrell Trimble was shot to death in July, 2012, to the Peoples Center to hear Gauthier's story.

Thanking the youth for marching and accepting the petitions for jobs they presented to her, Harp exclaimed, "If the demand is not placed there will be no action." The youth carried large banners created with local artists including likenesses of historical African American leaders, New Haven youth who lost their lives, and Gauthier.

Before presenting his life story, Gauthier received additional citations from Rep. Gary Holder-Winfield, elected two days later to fill the state senate seat vacated by Harp; Ald. Dolores Colon, chair of the Black and Hispanic Caucus of the Board of Alders, John Harrity, president of District 26, State Council of Machinists, Jarvis Tyner, executive vice chair of the Communist Party USA, and a poem by Baub Bidon.

The room was silent as Gauthier took the podium after giving his cousin in the audience a hug. He described racist incidents in segregationist Louisiana, in the military in the Dominican Republic, and in New Haven that had shaped his life. His mother's teaching and example led him to decide to turn his anger into organizing to bring about change, he said.

He described his years working at the Winchester sporting arms factory where he was a leader of a six- month strike in 1979 and then elected president of the International Association of Machinists, Victory Lodge 609. He also spoke of his earlier participation in the union organizing drive at Yale New Haven Hospital, acknowledging his co-workers from those experiences in the audience.

"As Communists we strive for a better life for workers and their families, those who produce the wealth of this great nation," said Gauthier. "I urge the youth today to step out of the crowd and become community leaders, become leaders on the job. Don't let other people who know us define us. Learn your family history. Learn the real history of our nation. You cannot change anything unless your first find out how it works and what role you can play to make this democracy in these United States work for all people."

Ben McManus, chair of the People's World committee that planned the event, thankedd Gauthier and recalled his own first introduction to the Communist Party newspaper as a child in Newark, New Jersey. Before enjoying a home made meal, those present reached into their wallets to make a contribution to the fund drive.[7]

The conference will be streamed from Chicago to regional meetings in New Haven, Los Angeles, and Orlando. Whether you’re on the East Coast, West Coast, in the MIdwest or the South, you’ll be able to participate.[8]