Courtney Rowe IA 01 was endorsed by Justice Democrats for 2018. 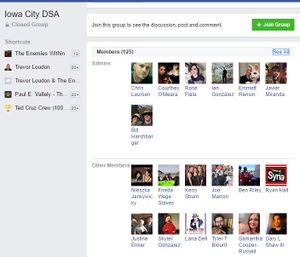 Democratic activists and progressive groups in Dubuque hosted a rally May 21 2017, in support of a single-payer health care system.

The “Medicare for All” rally was held from noon to 1 p.m. at Town Clock Plaza.

The rally was organized by Dubuque Democratic Socialists in collaboration with Our Revolution: Dubuque, and Americans for Democratic Action Iowa.

“A Medicare for All health care system is the only way to achieve truly universal health care that is both high in quality and cost savings,” organizers wrote in a press release. 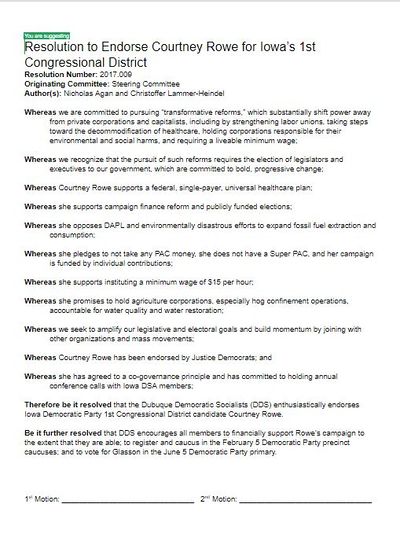 Whereas we are committed to pursuing “transformative reforms,” which substantially shift power away from private corporations and capitalists, including by strengthening labor unions, taking steps toward the decommodification of healthcare, holding corporations responsible for their environmental and social harms, and requiring a liveable minimum wage;

Whereas we recognize that the pursuit of such reforms requires the election of legislators and executives to our government, which are committed to bold, progressive change;

Whereas she supports campaign finance reform and publicly funded elections;

Whereas she opposes DAPL and environmentally disastrous efforts to expand fossil fuel extraction and consumption;

Whereas she pledges to not take any PAC money, she does not have a Super PAC, and her campaign is funded by individual contributions;

Whereas she supports instituting a minimum wage of $15 per hour;

Whereas we seek to amplify our legislative and electoral goals and build momentum by joining with other organizations and mass movements;

Whereas Courtney Rowe has been endorsed by Justice Democrats; and

Whereas she has agreed to a co-governance principle and has committed to holding annual conference calls with Iowa DSA members;

Be it further resolved that DDS encourages all members to financially support Rowe’s campaign to the extent that they are able; to register and caucus in the February 5 Democratic Party precinct caucuses; and to vote for Glasson in the June 5 Democratic Party primary.[3]