Coleman Alexander Young II (1918-1997) was a Michigan politician who served as mayor of Detroit, MI.

Coleman Alexander Young was Tuscaloosa, AL. His family moved to Detroit when he was 5, making their home in the ethnically- and racially-mixed Black Bottom neighborhood. Young was a good student in high school and planned to attend the University of Michigan but was denied financial aid because of his race.

In the 1930s, Young found an apprentice electrician program sponsored by Ford Motor Company. There, he became an underground union organizer and civil rights activist until he was drafted into the Army in 1942. [1]

Young served as a bombardier and navigator with the Tuskegee Airmen. Toward the end of the war, Young and about 100 other African-American men were arrested for demanding service at a segregated officers' club in Indiana. Young managed to get word to the Black press. Within days, he was released, and the Army began the process of integrating the club[2]. 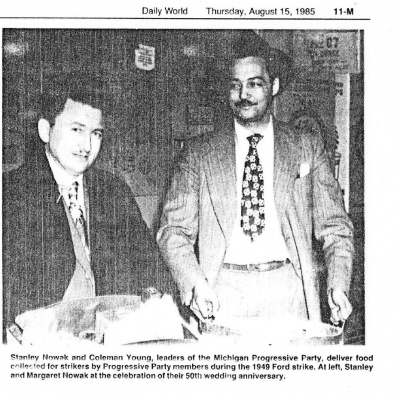 After the war, Young returned to Detroit, where he became a union organizer. But he lost his job when the head of the United Auto Workers Union "took a dislike to the commotion created by Young and other Black dissidents"[3].

Pauline Taylor, Coleman Young and Harold Washington all spoke at a rally at Madison Square Gardens against McCarthyism.[5]

In 1950 Quill Pettway, along with Dave Moore, Coleman Young, notable Detroit activists Lebron Simmons and Rev. Charles Hill was a proud founding member of the National Negro Labor Council. The NNLC had the goal of working through unions to advance the cause of all Black people and all workers.

Though McCarthyism and HUAC (House Un-American Activities Committee) hearings targeted NNLC leaders and caused the demise of the organization, it won important victories against discrimination both inside and outside the labor movement and is considered the forerunner of today's Coalition of Black Trade Unionists.[7] 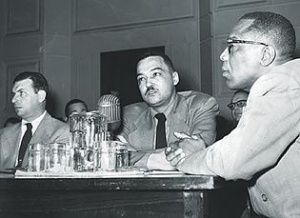 By 1952, Young's work brought him to the attention of the House Un-American Activities Committee, which was investigating the Communist Party USA in Michigan. Coleman Young refused to answer the committee's questions[8].

In 1988, Howard Johnson—who had been one of the leading communists in Harlem during the Great Depression—told interviewer Kay Takora about his return home from World War II: “I came back into activity in the Communist Party…. I at first became county educational director. New York county was the biggest county organization. From ’46 to ’49. And during that same period, I was assigned to help build a national Negro veterans organization which was called the United Negro and Allied Veterans of America. And that had the backing of the party and I was assigned by the party to work in that along with my duties as educational director of the county organization.”

Because at that time he was a steward in the auto workers union and [a] very prominent trade unionist in Detroit. Coleman and I were very good friends…. I never anticipated he would be a bourgeois mayor of Detroit. But Coleman’s a great guy, nevertheless. But I think that it was his party training that (helped) him to move forward as he did.”[9] 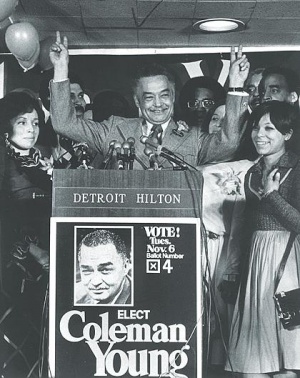 In 1964, Young won a seat in the Michigan Senate. Over the next decade, he would rise to become the Democratic Party floor leader, and, in 1968, he became the first Black chosen to represent Michigan on the Democratic National Committee. He was later selected as the DNC's vice chairman. In 1973, Young, then a Michigan state senator, made history when he was narrowly elected mayor of Detroit, the first African-American to lead what was then the nation's fifth-largest city[10]. 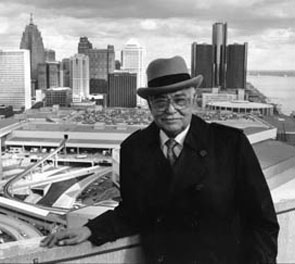 In the ensuing years, he built enormous grassroots support that carried him to easy re-election four times. But while he was credited with bringing the city's Black population into a position of political power and integrating the municipal work force, his critics saw a man who was sometimes profane and rarely apologetic, who often alienated the business community and presided over Detroit's precipitous economic decline during the 1970s and 1980s. His 1989 re-election campaign was rocked when a female city employee accused Young of fathering her son. Genetic tests confirmed that the mayor was indeed the father, and her paternity suit was settled.[11]

Democratic Socialists of America member and socialist historian Paul Buhle, wrote in a 1992 article for the Encyclopedia of the American Left[13];

Communists also gained from long-standing political contacts in the black community. Victories of black mayoral and congressional candidates with decades — old ties to the CP — a short list would include Coleman Young and George Crocket in Detroit, Gus Newport in Berkeley, and somewhat more ambiguously, Harold Washington in Chicago.''

Coleman Young was a covert member of the Communist Party USA.

On one trip to Moscow, Morris Childs’ fellow-delegate, the black Communist James Jackson, asked that Coleman Young, a future mayor of Detroit and a secret CPUSA member, be invited to Russia to study Marxism-Leninism; the Soviets vetoed him as too old. [14]

In the late 1980s, Young, who often complained of FBI harassment, had his townhouse bugged by federal agents during an investigation into municipal corruption. Twice divorced, Young generally kept a low profile after his retirement, though he did write his autobiography. Coleman Alexander Young died after a long battle with emphysema November 29, 1997[17].