Claudia Jones School for Political Education is a project of the Washington DC based Claudia Jones Club of the Communist Party USA.

Fletcher gave a presentation on African American radicals and their place in the U.S. labor movement.

The event was opened with a welcome from Nicaraguan Ambassador Francisco Campbell, who spoke of the inspiring revolution of the Sandinistas and other important historical events in that country. His remarks were followed by a spoken word performance about the legendary Black Communist, Claudia Jones, namesake of the new political educational school.

Fletcher’s talk, the highlight of the evening, provided an historical analysis of the role played by Black workers in the U.S. labor movement. “When we are thinking of Black History Month, we’ve got to think harder, and we’ve got to introduce class and gender,” Fletcher told attendees. “We’ve got to diversify our understanding about the understated brilliance of Black people.”

He said Black radicalism should be conceptualized as consisting of several “streams of water coming down from the hill that collect in a lake.” In that “lake of Black radicalism,” there are different currents of thought:

“Marxism, nationalism, various forms of feminism, etc. And when they are coming down that hill, they are very distinct. But when they reach each other and form that lake, you can’t distinguish the stream the water originated from. Black radicalism is that lake and is made up of those different currents of thinking and actions that have existed in Black America since the moment we were brought here as indentured servants and slaves. And so that radicalism has been an attempt to fight for absolute emancipation and to fight for something Lenin called ‘consistent democracy.’”

Connecting his comments to the labor movement, Fletcher said that trade unions have been haunted by two basic questions: “What does it mean to be formed in the context of a settler state, and what does it mean to deal with this issue of race?” The Congress of Industrial Organizations (CIO), in which the Communist Party USA played a major role along with other forces of the left in the 1930s and ’40s, was a site where Black labor activism and Black radicalism became very important.

One manifestation of that growing importance was an organization called the National Negro Congress, a united front group that Fletcher says gets far less attention than it should. “They understood that the fight against the Depression and the fight to change the way the New Deal was operating was going to benefit from the rise of this new labor movement. They and a number of the left-led labor unions had significant Black labor leadership.”

Fletcher’s presentation was followed by cultural performances from Luci Murphy joined by the Black Workers Center Chorus and participants of the Black Youth Project 100.[5]

The Legacy of Jack O’Dell 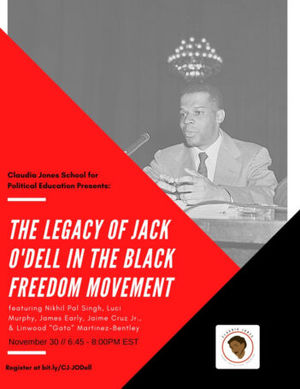 The Claudia Jones School for Political Education invites you to their next event, The Legacy of Jack O’Dell in the Black Freedom Movement. Born Hunter Pitts O’Dell in Detroit in 1923, he went on to be a militant labor organizer in the National Maritime Union, an activist in the Southern Negro Youth Congress, and a campaigner for Henry Wallace’s presidential bid in 1948 under the Progressive Party banner. Later, he joined the Communist Party USA for a brief period and then left to get more involved with Martin Luther King, Jr.’s SCLC. O’Dell was eventually forced out and became a public intellectual and writer for Freedomways magazine. In the 1980s, he helped lead Jesse Jackson’s run for the presidency. As a professor at Antioch College in Washington, D.C., O’Dell developed many relationships with community organizers and activists who will join us for this special evening in celebration of his life.

In July 2020 the Claudia Jones School for Political Education hosted an Unemployment and Tenant Organizing Town Hall for residents in the D.C.-Maryland-Virginia (DMV) area in the form of an online Zoom Webinar. Seven panelists who work in the local area, as well as one panelist from a national labor organization, were invited.

Organizers with the Claudia Jones School say the aim of the event was to facilitate a community-led dialogue between organizers in the area and to put unemployed people and tenants in contact with one another to strategize about ways to advocate for themselves as a collective.

The Claudia Jones School is currently contemplating ways to enhance dialogue between participants and panelists in an online format such as a webinar, seeking to raise the voices of everyone in the discussion while maintaining safety and technological feasibility. The intention is to create a consistent meeting place for poor and working-class people in the community so that they can organize and mobilize in the face of untenable material conditions. The School aims to replicate similar strategies that the Communist Party USA used to create the successful Unemployed Councils (UC) during the Great Depression in the 1930s.

As Jaime Cruz (who emceed the event and is a founding member of the Claudia Jones School) mentioned in the introduction to the town hall: “In moments of joblessness in the past, working people have coordinated the fightback against employers and forced the government to provide the necessary relief that working people needed…. It is this generation’s turn to pick up the mantle and build a mass movement of unemployed councils that will address the economic needs of our multi-racial working class in all areas of the country—inner urban, suburban, town and rural.”[6]