Cindy Engst is a Philadelphia, Pennsylvania academic. She teaches at Chestnut Hill College, Department: Education. She grew up in the Sarasota area, the daughter of Adolph Shapiro. 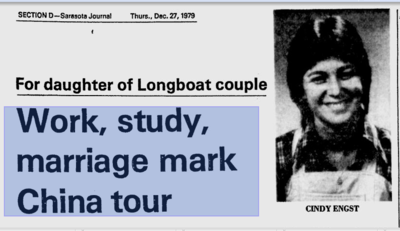 Fred Engst met Cindy Engst in Philadelphia in the 70s. They were later married in China. They are now separated.

"Meet the young Max Weiner," Feltonville's Cindy Engst tells her neighbors as she introduces Jeff Blum, one of three Democrats running in the hot 4th Senatorial District primary in Pennsylvania 1990. "He's the consumer candidate, like Max was."

"Happy Mother's Day!" exclaims Allyson Schwartz, a Blum rival, as she hands out Mother's Day cards to women entering a Northeast Philadelphia diner. Only two women in the Senate. Vote for a woman for some new leadership, OK?"[1]

Maybe it was an omen that Cindy Engst found herself working on the assembly line known as "Belt 13."

There, inside the old brick walls of Progress Lighting Co. in Kensington, Engst, president of Local 2005 of the International Brotherhood of Electrical Workers (IBEW), had found herself, along with about 40 co-workers, waiting in mid-September for a new job assignment.

She was waiting, Engst recalled, on the stretch of assembly line where workers rewire lighting fixtures, inspect parts and await orders from supervisors to move on to the heavier assembly lines. So random are the duties on Belt 13, said Engst, that people assigned there on a given day are ineligible for incentive pay available to workers on the plant's other, more demanding assembly lines.

In some ways, Engst would find, she also had been waiting on Belt 13 to get fired.

On Oct. 2, Engst, 36, who had been with Progress Lighting for nine years and had served as Local 2005's first female president for barely six months, found herself facing charges that she had cheated the company by stealing time to conduct union business.

Those charges, which led to her firing two weeks later, amounted to her second disciplinary action in a 10-day period. On Sept. 22, she had been suspended for three days for "insubordination" after failing to immediately comply with a supervisor's order that she leave his office.

Until then, Engst said, her record had been unblemished.

"They said they had something serious to discuss with me, a serious

infraction against my record," Engst recalled of the Oct. 2 meeting. "They said they thought I had been cheating the company. It was like a kangaroo court. It was ridiculous."

Walt Cameron, director of human resources for Progress Lighting, said the company had no comment on the Engst case or any other dispute with Local 2005 members.

Engst's dismissal has become both the subject of a grievance case scheduled to be heard Jan. 13 before the American Arbitration Association and a cause celebre among some of the nearly 900 members of Local 2005. After Engst's firing, Local 2005 members voted to use union funds to pay Engst's weekly salary of $275, pending the outcome of her arbitration hearing. Subsequently, the IBEW's international office told Local 2005 that it could not use union

But some Local 2005 members, determined to demonstrate their solidarity with Engst, took their cause to the rank and file. Collecting $5 and $10 voluntary contributions every Friday, the union's shop stewards have managed to amass enough donations to equal or nearly equal Engst's weekly salary.

"The union was a very passive union with the company, and Cindy came in and was doing an excellent job building a strong union, a confident union," said Joe Wilkins, a Progress Lighting employee for almost 14 years and a union shop steward. "They just railroaded her out of there."

"Basically," said Engst, "they just didn't want a progressive local in there."

Among the things that led to her problems, Engst said, were her efforts to strengthen the union through the formation of committees on plant safety and workers' compensation and encouraging union shop stewards to file more grievances against the company when they thought complaints were warranted.

Engst said her dismissal stemmed from a disagreement over a longstanding union practice whereby union officials attend to minor disputes, or potential grievances, that may take only a few minutes to settle without requiring the union official to "clock out" from the assembly line. The company's contract with Local 2005 allows for 500 hours every three months during which union officials may conduct union affairs on company time.

But on Oct. 2, Engst said, she was told by a company official that she had stolen company time" by failing to clock out when she was on some union business. Engst said that before, she had always clocked out when attending to union business that required longer meetings with management. But, she said, she had never before clocked out when the matter could be resolved in a few minutes.

On Oct. 2, Engst said, she was told the latter practice was no longer acceptable and she was promptly asked to leave the plant for an indefinite period. On Oct. 16, she was told she was fired.

"They treated her like a criminal," Wilkins said. "They marched her out with guards."

"Since she came in and started to make progress, new people in management came in," said Andre Charlow, an eight-year employee of the lighting company and a shop steward. "They saw the union getting stronger so they set out to weaken it or bust it completely."

Wilkins said that in his time as a shop steward, he has repeatedly attended to union business without clocking out. "They just dug and dug until they found something they could use," he contended.

Engst, who was elected president by the union's executive board in April, was not the first Local 2005 official to encounter problems in recent months with management. In a hearing Aug. 12 before the state Unemployment Compensation Board of Review, a Local 2005 shop steward, Richard Cro, argued that he had been unfairly denied unemployment compensation after being fired for insubordination because of "willful misconduct," a charge that customarily leads to the denial of such state benefits.

In Cro's case, the phrase "willful misconduct" was used to describe his failure to clock out while tending to union business.

The state board of review, however, after hearing testimony from witnesses, found: "The record shows that union stewards are allowed to leave their position on the assembly belt and go and speak to the employees on the same belt about union-management problems without clocking out."

Said Cro, who is awaiting a decision on an Oct. 29 arbitration hearing concerning his firing: "Once I started to write grievances and make them follow the contract, they started to come down on me."

Engst, who is still the union's president, said she had been denied access to the Progress Lighting plant and was unable to attend meetings of the committees on plant safety and workers' compensation.

"They've kind of injected fear into a lot of people," said Pat Pivariunas, a union member and Progress employee for more than four years. Cindy had brought this hope to everybody and they felt, if they were wronged, they could go to Cindy and she would grieve it. But now people are just worried about their jobs and their money."[2]