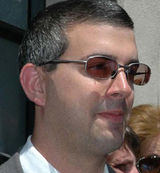 Chris Daly, became friends with Bill Sorro in the mid-'90s when they were involved with the Mission SRO Collaborative.

"I'm one of the hundreds of neighborhood activists who have greatly benefited from Bill's mentoring."

According to Daly[1], Sorro had "revolutionary patience," a quality that kept him from ever burning out.

"When you're working on these tough issues in tough political climates, it's easy to get frustrated... But Bill had a longer-range view and talked about things in terms of generations, instead of, 'Are you going to save that housing unit that day?' "

In August 2004 Chris Daly endorsed an anti “Bush Team” Protest at the Republican National Convention in New York, organized by Not In Our Name, an organization closely associated with the Revolutionary Communist Party.[2]

On January 22nd, the right-wing anti-choice movement will be coming to San Francisco to shout their anti-human rights, anti-woman message in the streets. At this time when women's rights to abortion are being challenged by the Bush administration and questioned in the Democratic party, it is crucial that we as men join the sisters organizing in opposition to this right-wing march and say: REPRODUCTIVE JUSTICE FOR ALL! [3]

Organizers said they expect to draw 400 to 500 attendees.

The new alliance's goal, according to its mission statement, is to "transform San Francisco into a city that places human needs and the common good above everything else."

In more practical terms, the organization was looking to build a political majority that carries clout at the ballot box and can set a successful agenda at City Hall, now dominated by Newsom.

"It's about creating strength in numbers, finding common ground and supporting each other," said Jane Kim, a Chinatown youth organizer who had been active in forming the new coalition.

"Progressives have found themselves in more of a reactive role," said Corey Cook, a political scientist at San Francisco State University.

Now, however, some political leaders on the left are trying to reclaim a bigger stake, and the San Francisco People's Organization is being viewed by some of its backers as the vehicle to achieve more power.

Among those expected to attend Saturday's convention were Gonzalez, Supervisors Ross Mirkarimi and Chris Daly and Public Defender Jeff Adachi.

"This is an attempt to draw people together from various progressive causes and issues throughout the city to examine what issues matter most to folks and to figure out how we an continue to work together on a consistent platform," Adachi said.[4]