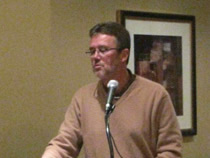 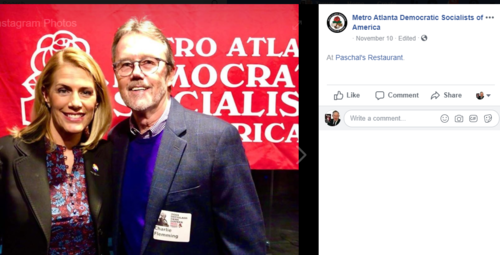 In November 2007, Rep. John Lewis was a special guest at the national Conference of Democratic Socialists of America held at the IBEW union hall in Atlanta, Georgia.[1]

The program of the first Atlanta Douglass-Debs Dinner, held at the Democratic Socialists of America conference on Friday November 9 was;[2]

The Foreclosure Five were arrested on August 31 for refusing to leave a Wells Fargo branch office in East Point until a bank official would meet and hear the demands of the Atlanta Fighting Foreclosure Coalition. Those arrested included: Reginald Eaves, Charlie Flemming, State Senator Vincent Fort, Dianne Mathiowetz and Milt Tambor. The case of criminal trespass was moved from East Point to Fulton County after the five defendants continued to enter a "not guilty" plea rather than plead guilty to a lesser charge. The monies raised will go toward the defense provided by "Peoples' Attorney" Brian Spears at the hearing and a possible trial [5]