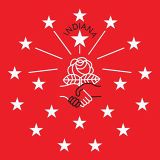 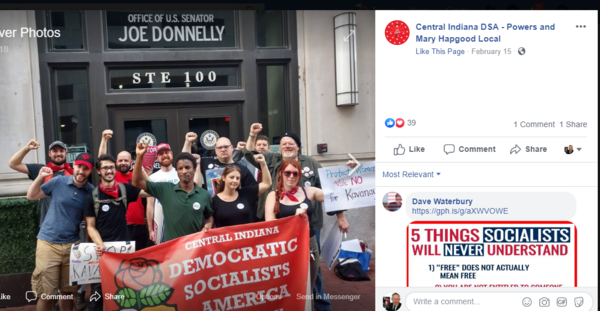 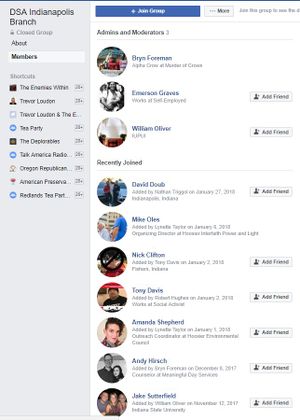 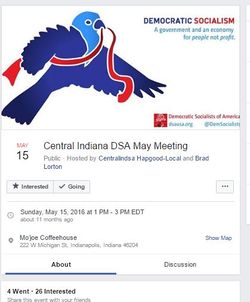 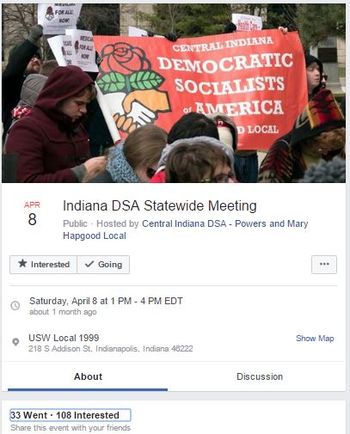 Central Indiana D S A and the Indianapolis Peace and Justice Center organized a December 14 vigil in downtown Indianapolis to demand the repeal of California's Proposition 187.

The local worked to develop an informal statewide coalition with Indiana members of the Committees of Correspondence and the Socialist Party USA. [2]

In 2005 the local ran a booth in the Indianapolis Labor Day Parade and Picnic; marched with Justice for Janitors and AFSCME; participated as an exhibitor in “Alternative Media Festival” sponsored by Public Access Indianapolis; and took part in an “Alternative Politics Forum” in Bloomington, sponsored by the Indiana University Progressive Faculty Union, where Local Chair Brad Lorton and Indianapolis Branch Chair George Fish were panelists.

Local members were active in the Indianapolis/Marion County Living Wage Campaign – organizing a legislative canvass and doing research on wages and other issues related to the working poor. Central Indiana DSA is a full organizational member of the Central Indiana Jobs with Justice Coalition and actively supports the local Justice for Janitors Campaign, sponsored by SEIU Local 3. The local also continued to participate in actions against the war and occupation in Iraq.[3]

In 2009 the Central Indiana local of Democratic Socialists of America meet monthly and began publishing a monthly newsletter, Central Indiana Socialist, with news of DSA, political issues, and other area Left organizations.

C.I. DSA is active in Jobs with Justice and Justice for Janitors, including representation on their official bodies, and the local’s treasurer, Pete Behrendt, was honored with JwJ’s first ever “I’ll Be There” award.

For the past few years local DSA and Socialist Party USA groups have met jointly, resulting in a cooperative venture called Indiana Socialist Fellowship to unite all left movements and unaffiliated progressives in the area.[4]

In a discussion of Jobs with Justice it was reported that Socialist Party USA can contribute, but, as a political party, cannot be on Steering Committee. May Day: Where should celebration be held? Rebecca Bow of SP-USA will be taking lead on this. Discussion of Indiana Socialist Fellowship. What is it? It is an informal network of socialists who gather for education, social, and political activities.[5]

Sunday, May 2, 2010, from 2:00 to 5:00 P.M. Socialists from Indianapolis and beyond will again celebrate May Day, the International Day of Labor. Allison Luthe, Community Organizer for Jobs with Justice (JwJ), will be keynote speaker.

Also on the program will be a brief presentation by Marvin Williams, Democratic Socialists of America (DSA) Local Chair, on the history of May Day and its significance today.

The JwJ connection with DSA goes back to 2004 when DSA joined JwJ as an organizational member. A representative from DSA is on JwJ’s Steering Committee. DSA’s local treasurer, Pete Behrendt was honored last year as first recipient of JwJ‘s “I’ll Be There” award for his loyal participation at JwJ demonstrations.

Central Indiana Jobs with Justice is an organization of labor, faith-based, community, and student organizations and individuals building a broad and long-term coalition to support worker rights and social justice. Workers’ rights, economic justice, and a sustainable global economy are JwJ goals.[6]