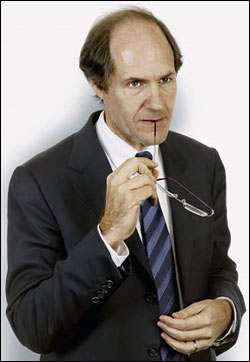 Cass Sunstein (born September 21, 1954) is the husband of Samantha Power. He is an American legal scholar, particularly in the fields of constitutional law, administrative law, environmental law and law and behavioral economics. Sunstein has served as the Administrator of the Office of Information and Regulatory Affairs since April, 2009. For 27 years, Sunstein taught at the University of Chicago Law School, where he still teaches as the Harry Kalven Visiting Professor. Sunstein is currently Professor of Law at Harvard Law School, where he is on leave while working in the Obama administration. His position within the hierarchy of the administration has earned him the non-official title of 'Regulatory Czar' and he is considered by many to be the most dangerous man in America.

Sunstein was born on September 21, 1954 into a Jewish-American family.

From the 1980s until the early 1990s, Sunstein was married to Lisa Ruddick who he met at Harvard University. Following the birth of their daughter Ellyn, he began seeing Martha Nussbaum, a professor of law at the University of Chicago. On July 4, 2008, Sunstein married Samantha Power, a professor of public policy at Harvard and also a former colleague of Barack Obama at the University of Chicago. He also worked with her on Obama's presidential campaign.

Sunstein had a pet Rhodesian ridgeback, Perry. During the Clinton impeachment hearings, Sunstein grew tired of appearing on news programs, and agreed to appear on Greta Van Susteren's CNN program only if he could bring Perry on the show with him; she agreed. Perry died in the fall of 2008. The University Of Chicago Law School has created the Perry/Sunstein fund in Perry's memory, a scholarship fund for a student with an interest in animal welfare.

Sunstein was the Samuel Rubin Visiting Professor of Law at Columbia Law School in the fall of 1986 and a visiting professor at Harvard Law School in the spring 1987, winter 2005 and spring 2007 terms. He teaches courses in constitutional law, administrative law and environmental law, as well as law and economics. In the fall of 2008 he joined the faculty of Harvard Law School and began serving as the director of its Program on Risk Regulation.

He was a faculty member at the University of Chicago Law School for 27 years, from 1981 to 2008. Here Sunstein worked alongside Barack Obama for more than a decade[1] He continues to teach there as the Harry Kalven Visiting Professor. Sunstein is currently the Felix Frankfurter Professor of Law at Harvard Law School, from where he is on leave while working in the Obama Administration. In 2008 Sunstein served as an advisor for Barack Obama’s presidential campaign.

Sunstein joined Obama’s campaign early on, calling the President a “visionary minimalist.” He was part of a team of 29 behaviorists who drafted memos on ways to increase voter turn-out, improve a candidate’s message and raise money. Among their suggestions were having campaigners repeat that ‘record turnout is expected’ and raffling off face time with Obama for donors.[2]

Sunstein's confirmation had been long blocked because of controversy over allegations about his political and academic views. On September 9, 2009, the Senate voted for cloture on Sunstein's nomination as Administrator of the Office of Information and Regulatory Affairs, Office of Management and Budget. The motion passed in a 63–35 vote. The Senate confirmed Sunstein on September 10, 2009 in a 57–40 vote.

In January 2001, President George W. Bush was inaugurated. The election was not decisive, unfortunately, and President Bush won only after Florida's Supreme Court <a href="https://caselaw.findlaw.com/us-supreme-court/531/98.html">ruled in his favor</a> over his Democrat opponent and former Vice President, Al Gore, Jr. The American left, predictably, resisted the new president, believing the courts were rigged against their opponent.

In February 2001, leftist Yale law professor Bruce Ackerman fueled those fears. He wrote an article for the <a href="https://web.archive.org/web/20041224170504/http://www.prospect.org/web/page.ww?section=root&name=ViewPrint&articleId=5663">American Prospect</a> despairing over Bush's win in the contested election, making the huge stretch that because the new President was not "independently elected" (i.e. claiming Bush was 'elected' by the courts) Bush's court appointees would not reflect the electorate. Ackerman despaired:

"If such a president is allowed to fill the Court, he will be acting as an agent of the narrow right-wing majority that secured his victory in the first place."

Therefore, Ackerman proposed that "[W]hen sitting justices retire or die, the Senate should refuse to confirm any nominations offered up by President Bush."

And so, Democrats fought mightily against Bush judicial appointees. In May 2001, the <a href="https://www.nytimes.com/2001/05/01/us/washington-talk-democrats-readying-for-judicial-fight.html">New York Times </a>reported that "[F]orty-two of the Senate's 50 Democrats attended a private retreat this weekend in Farmington, Pa., where a principal topic was forging a unified party strategy to combat the White House on judicial nominees." (emphasis added)

In order to develop their strategy, "[T]he senators listened to a panel composed of Prof. Laurence Tribe of Harvard Law School, Prof. Cass Sunstein of the University of Chicago Law School and Marcia Greenberger, the co-director of the National Women's Law Center, on the need to scrutinize judicial nominees more closely than ever."

American Academy of Arts and Sciences

He is a member of the American Academy of Arts and Sciences (elected 1992).[4]

In 2005, the American Constitution Society (ACS) sponsored a conference at Yale Law School entitled "The Constitution in 2020," whose purpose was to give liberal/left lawyers and judges a forum wherein they could trade ideas on what they would like the U.S. Constitution to look like 15 years in the future and how they could influence it toward that end. Sunstein participated in this forum, where he put forth his ideas about a "Second Bill of Rights.” The Weekly Standard offered this assessment of the goals of the ACS forum:

“The essence of the progressive constitutional project is to recognize ‘positive’ rights, not just ‘negative’ rights, so that citizens are not only guaranteed freedom from specified forms of government interference, but also are guaranteed the receipt of specified economic benefits. The bottom line is that Congress would no longer have the discretion to decline to enact liberal policies. The triumph of the left would be constitutionally mandated.”[5]

In April 2005, Sunstein opened up a conference at Yale Law School entitled, "The Constitution in 2020," which sought to change the nature and interpretation of the Constitution by that year.[6]

The Constitution 2020 movement has plotted a strategy for how liberal lawyers and judges might bring such a constitutional regime into being.

Sunstein was a speaker for a Netroots Nation convention.[7]

Sunstein is a contributing editor to The American Prospect.[4]

Sunstein is a contributing editor to The New Republic.[4]

Sunstein has been a guest writer on The Volokh Conspiracy blog as well as the blogs of law professors Lawrence Lessig (Harvard) and Jack Balkin (Yale).[4]

Sunstein is a proponent of judicial minimalism, arguing that judges should focus primarily on deciding the case at hand and avoid making sweeping changes to the law or decisions that have broad-reaching effects. He supported George W. Bush's judicial nominees Michael McConnell and John Roberts. Sunstein also provided strong theoretical support for the death penalty. Much of his work also brings behavioral economics to bear on law, suggesting that the "rational actor" model will sometimes produce an inadequate understanding of how people will respond to legal intervention.[4]

Contending that “the judiciary is already politicized," Sunstein says the notion that "judges are not policymakers" is a "myth." Judges’ “political commitments,” he states, “very much influence their votes." He states that "judges are subject to conformity pressures and like-minded judges go to extremes, in the sense that ideological predispositions are heightened when judges are sitting with others who were appointed by presidents of the same political party."

In recent years, Sunstein has collaborated with academics who have training in behavioral economics, most notably Daniel Kahneman, Richard Thaler and Christine Jolls, to show how the theoretical assumptions of law and economics should be modified by new empirical findings about how people actually behave.

According to Sunstein, the interpretation of federal law should be made not by judges, but by the beliefs and commitments of the U.S. President and those around him. Sunstein states:

"There is no reason to believe that in the face of statutory ambiguity, the meaning of federal law should be settled by the inclinations and predispositions of federal judges. The outcome should instead depend on the commitments and beliefs of the President and those who operate under him."

Sunstein (along with his coauthor Richard Thaler) has elaborated the theory of libertarian paternalism. In arguing for this theory, he counsels thinkers/academics/politicians to embrace the findings of behavioral economics as applied to law, maintaining freedom of choice while also steering people's decisions in directions that will make their lives go better. With Thaler, he coined the term "choice architect."

He is considered so prolific a writer that in 2007, an article in the legal publication The Green Bag, coined the concept of a "Sunstein number" reflecting degrees of separation between various legal authors and Sunstein, paralleling the Erdős numbers sometimes assigned to mathematician authors.[4]

Sunstein has authored the following articles and books: