Template:TOCnestleft Carolina Bortolleto is a Connecticut activist. Communications and Grant Manager at CT Students for a Dream. Lives in Danbury, Connecticut. Twin sister of Camila Bortolleto.

The Connecticut People's World Committee presented its annual Amistad Awards on Saturday December 12 2021 to mark the 102nd anniversary of the founding of the Communist Party USA, with awards being presented to Sen. Julie Kushner, D-Danbury, Pastor Rodney Wade of Waterbury and SEIU activist Azucena Santiago.

“I’m going to fight like hell and will do everything in my power to stand up for you and your families,” U.S. Sen. Chris Murphy told a room full of young people in Fair Haven who fear an incoming president may kick them out of the country. “You are American and you are a part of the fabric of this country.”

Murphy made that promise Sunday to more than 20 young so-called “DREAMers”, immigrants who came here as children and are pursuing their educations. They currently hold authorization to legally stay in the United States through the Deferred Action Childhood Arrival (DACA) program.

Now, with President-Elect Donald Trump promising to crack down on illegal immigration, many of the people who met at the Junta for Progressive Action office on Grand Avenue on Sunday were nervous about the future of DACA, and their futures in the U.S.

Could participation in the program have led to the creation of list of people to deport?

Murphy responded that lawyers are exploring this question. He said the worst-case scenario would be that by complying with the law, people made themselves targets for punishment.

“I still have a hard time believing Trump would go through with that,” he said. “The visual of ICE [Immigration and Customs Enforcement] personnel rounding up people from their homes from that list would be an epic moral disaster for the country and an epic public relations disaster for Trump and the Republicans,”

Denia Perez, who entered the country from Mexico when she was 11 months old, is now 27. As a student at Quinnipiac Law School, she has DACA protection. “There is always a risk in sharing information,” she said. “Politically, it wouldn’t make sense to target DACA beneficiaries but it is a fear people have.”

At Sunday’s session, Murphy met with DACA beneficiaries and immigration reform activists including Connecticut Students for a Dream (C4D) co-founders Camila Bortolleto and Carolina Bortolleto, and Fair Haven Community Heath Center CEO Suzanne Lagarde at Junta. He said he wanted to listen to their concerns, provide his assessment of immigration reform and assure them of his commitment to their right to legally remain in the U.S.

Junta Executive Director Sandra Trevino and Advocacy Director Ana Maria Rivera-Forastieri said they fear that the federal government will cut funding from “sanctuary cities” like New Haven that protect undocumented residents from deportation. Trump promised to do that last fall on the campaign trail.[1] 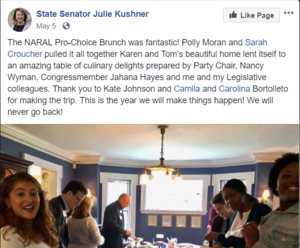 The NARAL Pro-Choice Brunch was fantastic! Polly Moran and Sarah Croucher pulled it all together Karen and Tom’s beautiful home lent itself to an amazing table of culinary delights prepared by Party Chair, Nancy Wyman, Congressmember Jahana Hayes and me and my Legislative colleagues. Thank you to Kate Johnson and Camila and Carolina Bortolleto for making the trip. This is the year we will make things happen! We will never go back!

VOLUNTEER SPOTLIGHT: Our favorite warrior activists knocked on 230 doors this weekend and still made the time to come in and phone bank! Thanks for all you do! Camila Bortolleto Carolina Bortolleto (also special thanks to Kate Conetta for making calls and treating for dinner! 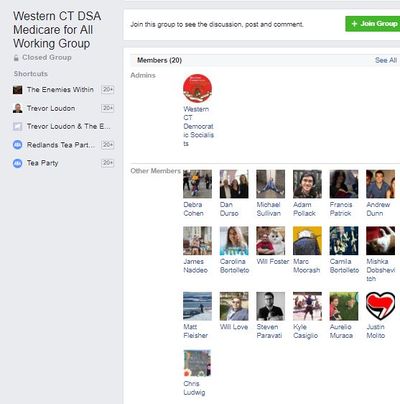 Socialist Action Forum: After the Women’s March on Washington Which Way Forward?

The massive response to the call for a women’s marchon Washington has raised hopes that we finally have the capacity to build a powerful mass movement, a mass movement that can defend and advance therights and economic conditions of women and children, especially from the communities most victimized by racism, Islamophobia, and chauvinism. What should our priorities be? What kind of movement do we need? What would women’s full liberation look like? Join us for a discussion of perspectives.