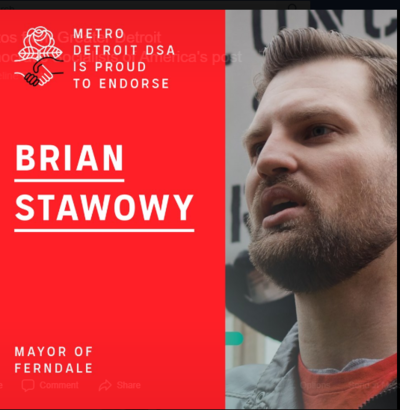 Brian Stawowy, who is running for mayor, learned about Detroit DSA while organizing with the Abdul El-Sayed campaign for Governor. He has been an active member of our chapter’s Medicare for All Working Group. Thirty-one-year-old Stawowy has witnessed firsthand the effects of development in driving gentrification in Ferndale, making the city unaffordable for many young people. An engineer, he has watched “developer sweetheart deals” pass through the city government unopposed. As Stawowy said, “If we don’t take action now, we’re going to be a city for the rich.”

Nada Daher is a healthcare worker at Beaumont and an active chapter member who serves on the Steering Committee, co-chairs the Antiracism Working Group, and organizes for reproductive rights. Daher moved to the U.S. after her family emigrated to Canada as refugees from Lebanon. For Daher, immigrant rights are paramount. She is committed to making Ferndale an affordable place for working-class people, a sanctuary for migrants, and a beacon for the Green New Deal.

Daher and Stawowy are running together as part of the Ferndale for All slate. They were joined in seeking Detroit DSA’s endorsement by Kat Brunner James, a civil rights attorney with a 17-year history of progressive activism in Ferndale. She fought for instant runoff voting (IRV) there. The campaign was successful, though IRV has yet to be implemented because of issues with Michigan’s voting machines.

There was some debate about whether to endorse Brunner James, as she is a new DSA member and will not be running on the Ferndale for All slate. Electoral Committee co-chair Jessica Newman explained the rationale for forwarding a recommendation to endorse all three: Brunner James’ positions are closely aligned with Daher and Stawowy’s, and while she’s not running on the slate, if all three are elected, they could vote as a bloc. There are five city council seats plus the mayor, who votes as a sixth member of the city council.[2]