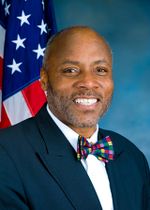 Bill Perkins is a State Senator representing the 30th District of New York.

Perkins was awarded a scholarship to Collegiate Preparatory School in Manhattan and later a scholarship to Brown University. After graduating from Brown in 1972 with a BA in Political Science Perkins returned to New York and dedicated himself to giving back to his community through activism and public service.[1]

Bill Perkins is a Berniecrat, a term used for those democrats (generally) running for office who have expressed support of former presidential candidate Bernie Sanders.[2]

In 1981, the members of Mayview Union thankedd Perkins for his work with the New American Movement saying,

In 1982 Bill Perkins was a members of Pittsburgh New American Movement, a labor organizer and member of South Hills NOW[4]. 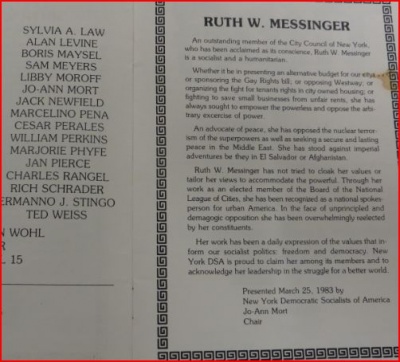 Bill Perkins was amongst the endorsers of a March 1983 New York City Democratic Socialists of America tribute to DSA member Ruth Messinger.

In 1985 Bill Perkins, a Harlem District leader, was a member of Democratic Socialists of America.[5]

Prior to the State election, Perkins served on the New York City Council. During his eight year tenure, he was the third highest ranking member of the Council serving as the Deputy Majority Leader. Perkins introduced the Patriot Act Resolution in the City Council which mandates that anti-terrorism laws and policies be implemented in New York City that do not infringe on the fundamental rights and liberties of New Yorkers. He also opposed racial, ethnic and religious profiling. He sponsored landmark legislation to protect the rights of gay, lesbian and transgender communities. He was instrumental in leading the fight for the Living Wage to provide a minimum wage that was also a living wage.[6]

On May 31 1998 the Peoples Weekly World held a Paul Robeson birth centennial celebration in New York, at the Henry Winston Auditorium.

More than 250 U.S. cities took part in the March 20, 2004 Global Day of Action protesting Pentagon wars and occupations. The biggest demonstration was in New York, where 100,000 people marched and rallied.

The event was initiated by the International ANSWER--Act Now to Stop War and End Racism--Coalition, and United for Peace and Justice.

During the ANSWER segment of the rallies, Brian Becker, a co-director of the International Action Center and member of the ANSWER Steering Committee, applauded the courage of the Muslim community in turning out for the march, given the current repression, surveillance and raids.

Teresa Gutierrez of the International Action Center appealed to the crowd to boycott Coca-Cola, implicated in the assassination of workers unionizing its Colombian plants.

Brenda Stokely, chair of New York City Labor Against the War and president of AFSCME District Council 1707, vowed, "We're going to bring down the imperialist powers who think they have the right to slaughter our children!" Larry Holmes of the International Action Center spoke and a taped message from political prisoner Mumia Abu-Jamal urged resistance to racist oppression, police occupation and imperialist oppression.

On November 4, 1999 New York State Assemblyman Richard Gottfried presented State Assembly citations to four honorees, Iris Baez, founder and president of Community and Parents Against Police Violence, Ron Daniels, Executive Director of the Center for Constitutional Rights, Elizabeth Hall, a member of the National Committee of the Communist Party USA and Steelworkers Organization of Active Retirees, and Bobbie Rabinowitz, a founder of the New York City Labor Chorus at the Peoples Weekly World 75th anniversary celebrations at the Henry Winston Unity Auditorium in New York. Event co-chairs were Maria Ramos of the United Federation of Teachers and Carolyn Rummel, managing editor of the Peoples Weekly World. [9]

Harlem based City Councilor Bill Perkins said he was honored to be participating, because the honorees "were such extraordinary people, active on the concerns that all of us share". Perkins presented the honorees with City Council citations.[10]

On October 22, 2000 the Peoples Weekly World held its 4th annual celebration luncheon in New York, at the Henry Winston Auditorium.

US Rep. Charles Rangel sent greetings and State Senator Eric Schneiderman sent a letter of commendation to the honorees.[12]

Pioneering civil rights activist Dorothy Burnham was warmly received with a standing ovation after she received her award. At 96 years old, the program was not long enough to mention all her life's work, which began in the 1930s with the American Student Union and continued in the 1940s with the Southern Negro Youth Congress in Birmingham. She has long been active in women's and peace organizations, and is currently she is president of the Louis Burnham Awards Fund.

State Senator Velmanette Montgomery, another of the honorees, stayed to talk with Dorothy and took several pictures for their local paper. State Sen. Bill Perkins appeared to show his appreciation and respect for his colleague, Sen. Montgomery, who fought a hedge fund-backed opponent over the issue of public education in the recent election.

City Council Member Letitia James sent a tribute to the People's World, printed in the program's ad book. She praised the work of the World in making New York - and beyond - a better place in many ways. And she praised her "mentor" Velmanette Montgomery.[13]

In August 2004 Bill Perkins, New York City Council endorsed an anti “Bush Team” Protest at the Republican National Convention in New York, organized by Not In Our Name, an organization closely associated with the Revolutionary Communist Party[14].

Bill Perkins was elected to the New York State Senate in November 2006.Perkins represents the 30th Senatorial District which is part of New York County and encompasses Harlem, the Upper West Side and Washington Heights. A life long resident of Harlem, Bill Perkins started his political career as a community activist.

The New York Friends of the Peoples Weekly World newspaper held its annual Better World Awards Gala May 6 2007, to celebrate the May Day and Cinco De Mayo holidays and to benefit the paper.

On March 23, 2007, "people jammed in to sit on folding chairs or stand shoulder-to-shoulder and listen to speakers tell of the Communist Party USA’s contributions to American labor and democratic rights". The crowd studied display cases full of photos, buttons, leaflets and letters from the 2,000 boxes of archives donated by the Communist Party to New York University’s Tamiment Library, which specializes in left and labor history.

The presence of dozens of party and Young Communist League members in the crowd indicated that the Communist Party continues to be an important and growing part of the American political scene.

New York State Sen. Bill Perkins told how during eight years in the New York City Council, he sat in the seat once occupied by Communist Councilman Ben Davis, who never lost an election but was removed from office in chains under the McCarthyite Smith Act.

“His record in the council,” Perkins said, “is one that many of us are still trying to live up to, because he was among the first to champion laws for workers, for housing rights and for civil rights in the City Council.” .[16]

William Perkins is a past recipient of Asian Americans for Equality's annual Dream of Equality award.[19]

Communist gathering/"We're Not Going Back"

March 2015, a crowd of New Yorkers lined up at the security desk in order to make their way up to the third floor to Melba's Restaurant and the annual "We're Not Going Back" celebration of African American culture and struggle.

2014's guest speaker was Angela Davis, and the occasion was held downtown at the Henry Winston Unity Hall. This year's featured speaker was the newly elected mayor of Newark, the Honorable Ras Baraka.

The meeting's theme was "Support City Officials Who Fight for Equality, a Living Wage and Against Racism."

Estevan Bassett-Nembhard, New York organizer of the Communist Party USA, opened the program, greeting the over 200 participants and emphasizing the need for unity in the vital struggle to end racism. "We stand on the shoulders of those who defeated slavery and Jim Crow. Our history tells us that united we stand and divided we fall." He continued, "We're not going back! Our pledge is to stick together."

Naquasia LeGrand chaired the event, winning a round of applause when she announced that she was a fast food worker and an organizer of that movement.

A large and politically diverse host committee was formed to welcome Mayor Baraka, including representatives from labor, fast-food workers, police reform, immigrant rights, LGBTQ, religious and peace and justice movements. Among them were Alisha Garner, the sister of Eric Garner murdered by police on Staten Island, and elected officials including State Senator Bill Perkins, State Assemblyman Keith Wright, along with a representative of City Council member Ydanis Rodriguez. Baraka received proclamations from Perkins, Wright and Rodriguez. He also received a letter of welcome from Mayor Bill de Blasio.

As the evening ended one participant said, "This was a great event that showed that left and center forces in our city can work together to build principled unity and a stronger movement to help defeat racism and poverty."[20]

Everyone who was arrested was issued appearance tickets for the City of Albany County split among June 10, June 11 and June 12.

The following were arrested, according to NYSP: