Barack Obama and Council for a Livable World

Template:ObamaBox Template:TOCnestleft Barack Obama and Council for a Livable World.

The Council claims to have had early influence on both Barack Obama and Joe Biden.

Council for a Livable World has a history of helping to elect new candidates who can make a difference in the Senate, such as a little-known state senator from Illinois named Barack Obama and a 29-year old Joe Biden in his first statewide contest.[1] 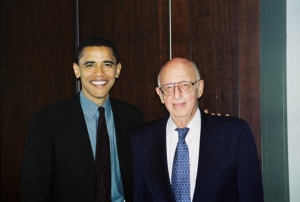 Barack Obama had some sort of relationship with long time Council for a Livable World leader Jerome Grossman.

The Council for a Livable World's John Isaacs wrote in Jerome Grossman's eulogy;

” Now, as an aside, we have a dictum at Council for a Livable World. If we support a candidate in his or her first major political contest, he or she will always remember who was with them at the beginning. That has been true with such political figures – (he says modestly) – as President Barack Obama and Vice President Joseph Biden. Or former Maine Senate Majority Leader George Mitchell. They remember who was with them when they launched their political careers. And that's why it was so nice to see a tweet from Vice President Biden after Jerry's death: "He was a good friend who worked tirelessly to advance U.S. security through nuclear arms control.” [2]

Council for a Livable World October 3, 2007 praised Senator Barack Obama for his pledge to pursue a world without nuclear weapons and improve U.S.-Russian relations.

At a speech that day at DePaul University, Obama stated: "Here's what I'll say as President: America seeks a world in which there are no nuclear weapons. We will not pursue unilateral disarmament. As long as nuclear weapons exist, we'll retain a strong nuclear deterrent. But we'll keep our commitment under the Nuclear Non Proliferation Treaty on the long road towards eliminating nuclear weapons. We'll work with Russia to take U.S. and Russian ballistic missiles off hair-trigger alert, and to dramatically reduce the stockpiles of our nuclear weapons and material."

Senator Gary Hart, chairman of Council for a Livable World, applauded Obama's pledge. Hart remarked "By placing the issue of the elimination of nuclear arsenals at the center of his foreign policy, Senator Barack Obama has performed a great public service and deserves attention and respect from all those who see this issue as crucial to our times and who have been watching and waiting for strong leadership and courage."[3]

Joining Obama at the Oval Office signing ceremony was Lt. General Robert Gard, chairman of the Center for Arms Control and Non-Proliferation. Gard had been highly involved in efforts to stop torture and shut down Guantanamo, including as a member of the bipartisan Campaign to Ban Torture.

Brigadier General John Johns, board member of the Center's sister organization, the Council for a Livable World, was also present at the signing due to his advocacy for closing Guantanamo.[4] 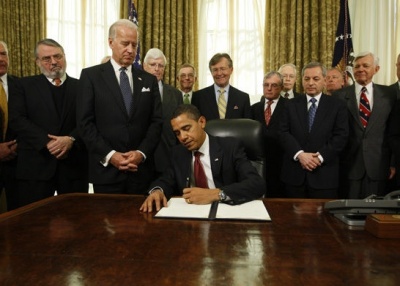 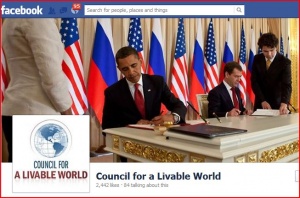 President Obama planned to use a speech in Berlin June 2013 to outline plans for further reductions in the American nuclear arsenal if Russia agrees to pare back its weapons at the same time, administration officials said .

Resuming a drive toward disarmament that he had largely shunted aside over the past two years, Mr. Obama will propose trimming the number of strategic warheads that each of the two big nuclear powers still maintains by up to a third, taking them below the 1,550 permitted in the treaty he signed with Russia in his first term, a senior administration official said. That would leave each country with just over 1,000 weapons.

Mr. Obama will also declare that he will work with NATO allies to develop proposals for major cuts in tactical nuclear weapons, which are not covered by the existing treaty. Russia, which has far more tactical nuclear weapons deployed than the United States and Europe do, has firmly resisted such cuts. There are fears that its tactical weapons are in parts of Russia where they risk being seized by terrorist groups.

Mr. Obama will also announce that he will host a final nuclear security summit meeting in the United States just before he leaves office.

The president, who once talked about eventually ridding the world of nuclear weapons, faces enormous obstacles to any further reductions, both in Moscow and in Washington. President Vladimir V. Putin of Russia has demanded further concessions on missile defense before entertaining deeper nuclear cuts, and Republicans in the Senate have made clear they would resist any treaty that went beyond the New Start pact ratified in 2010. Mr. Obama’s aides have said that they have no appetite for another treaty battle, and that they would try to follow the precedent of the first President George Bush, who arranged reciprocal but not binding cuts with the dying Soviet Union without a treaty.

But the president’s return to the issue of nuclear reductions, however tentative, suggests he wants to invest at least some of his remaining time in office to making enough progress that he can point to it as an important legacy. “It’s a way of signaling what he sees his agenda for the rest of his second term being,” said an administration official, who, like others, declined to be identified in advance of the speech.

Supporters of further disarmament said they hoped Mr. Obama would refocus attention on the goal after rarely mentioning it in recent years, while he was consumed by other issues. “The most important thing he could do is lay out the broad agenda for the next three and a half years,” said John Isaacs, executive director of the Council for a Livable World, an advocacy group.

In addition to further reductions, Mr. Isaacs said, there are several policy changes Mr. Obama could take that would move the country further away from cold war-style national security. He said the president could take nuclear weapons off high alert and change nuclear doctrine to say that the only purpose of such weapons would be as a deterrent. [5]