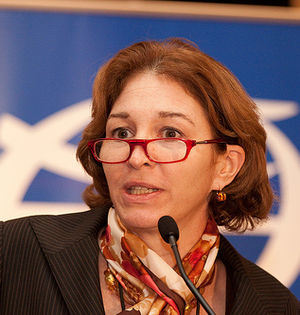 Template:TOCnestleft Ann-Marie Slaughter is the wife of Andrew Moravcsik.

In 2007, Slaughter and her husband spent a ten-month sabbatical in China where she wrote a brief series of articles for the New York Times. She commented on this move, "My husband and I have just relocated to Shanghai for ten months to put our two sons, aged 8 and 10, in school here to learn as much Mandarin as possible and to get a feel for Asia."[1]

She has been a regular contributor to the America Abroad blog on TPMCafe.com, and still contributes periodically to TPMCafe.[2]

In the 1980s Slaughter was part of the team headed by Professor Abram Chayes that helped the Sandinista government of Nicaragua bring suit against the United States in the International Court of Justice for violations of international law, in the case Nicaragua v. United States (1986).

President Barack Obama has described himself as a constitutional law professor at the University of Chicago Law School. He held the position of Lecturer, an adjunct position, from 1992 to 1996. He held the position of Senior Lecturer from 1996 until his election to the senate in 2004. From 1991 - 1997 he taught alongside professor Elena Kagan. He also taught alongside Anne-Marie Slaughter from 1992 - 1994.[1]

As at Jan. 15, 2002, Anne-Marie Slaughter had endorsed the Harvard Living Wage Campaign. The Campaign was endorsed by Boston Democratic Socialists of America, the Socialist Party USA Boston Local, Howard Zinn and many others.[3]

The Princeton Project on National Security

As at Jan. 5, 2008, Slaughter served alongside G. John Ikenberry as co-director of The Princeton Project on National Security which was launched in Fall, 2004. The Project is working "to develop a sustainable and effective national security strategy for the United States of America."[4]

While at Princeton in 2006, she proposed a new League of Nations that she called a "Concert of Democracies." Under her plan, which was included in the final report of the Princeton Project, a comprehensive review of national security, members of the alliance would have to be real democracies that held regular multiparty elections. The group's purpose would purportedly be to work within existing global institutions such as the United Nations; but in the event that those fail, to provide a framework "for organizing and legitimizing international interventions, including the use of military force."[1]

Working for the Secretary of State

In November 2006 Slaughter was chosen to chair the Secretary of State's Advisory Committee on Democracy Promotion.

On January 23, 2009, U.S. Secretary of State Hillary Clinton announced the appointment of Slaughter as the new Director of Policy Planning under the Obama administration.

At the State Department, Slaughter was chief architect of the Quadrennial Diplomacy and Development Review whose first instantiation was released in December 2010.

In February 2011 Slaughter returned to Princeton and is teaching a seminar on National Security Policy, but remains a consultant for the State Department.

In April 2007, Slaughter traveled with her husband Andrew Moravcsik, to Libya with Monitor Group, an organization that specializes in helping organizations and governments with the issues that are most important to them. Libyan leader Moammar Gadhafi had contracted the group to enhance his public image in the U.S. The project was officially called "The Project to Enhance the Public Image of Libya and Moammar Gadhafi." The group's official summary memo of the project, obtained by World Net Daily stated that Monitor Group had been in discussion with George Soros about ways to "advocate on Libya's behalf." At the time, Slaughter was dean of the Woodrow Wilson School of Public and International Affairs at Princeton University and was an adviser to then-presidential candidate Barack Obama.

Monitor was reportedly paid by the Government of Libya $250,000 a month along with an open expense account that would not total more than $2.5 million, apparently including travel for those sent to visit the country. The memo stated the group worked on behalf of Libya to "to enhance international understanding and appreciation of Libya and the contribution it has made and may continue to make to its region and to the world," and to present Gadhafi "as a thinker and intellectual, independent of his more widely known and very public persona as the Leader of the Revolution in Libya."

Slaughter said she was aware that Monitor was being paid by the Libyan government, "but her understanding was that it was for consulting regarding economic and political reforms." She stated that she has never been an employee of Monitor Group. She was listed in Monitor Group literature as official "Monitor Talent." Subsequent to the above story breaking, Slaughter's profile page on the Monitor Group website was taken down. However it is accessible on the Way Back Machine. Click here to view Slaughter's profile with Monitor Group.[1]

Ann-Marie Slaughter, of Princeton University, was an identified member of JournoList - an email group of approximately 400 "progressive" and socialist journalists, academics and "new media" activists.

JournoList members reportedly coordinated their messages in favor of Barack Obama and the Democrats, and against Sarah Palin and the Republican Party. JournoList was founded in 2007 and was closed down in early 2010.[5]

Center for a New American Security

Slaughter is affiliated with the Center for a New American Security (CNAS). Her exact position with the organization is unknown.[6]

CNAS held its official launch on June 27, 2007 at the Willard InterContinental Hotel in Washington, D.C. The day-long event, entitled “Toward a New American Security,” included three expert panels based on recently released CNAS reports as well as keynote addresses by Senators Hillary Clinton and Chuck Hagel. Discussions and debates covered the future of U.S. ground forces, a new strategy for the war in Iraq, and the nature of the national security inheritance the next president will receive from the current administration.

At the launch, Slaughter participated in a panel alongside Richard Danzig, Kurt Campbell, James Steinberg and Francis Fukuyama.[7]

On March 11, 2008, Slaughter wrote an article in The Huffington Post entitled "A Candidate of Hope and Hard Work." In the article she made reference to Samantha Power's resignation over calling Hillary Clinton a "monster". Slaughter also praised Power, stating:[8]

"is a brilliant journalist and author, a powerful moral voice, a foreign policy adviser who thinks outside the box." 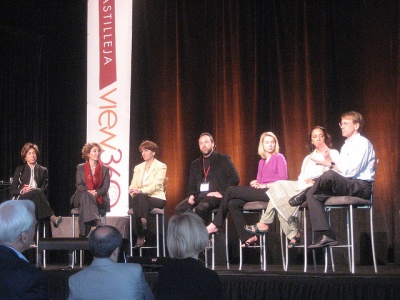 On May 3, 2008, Castilleja School hosted an event entitled "VIEW360: THE Centennial Symposium". The School's mission is:[9]

"To prepare our students for the wider world, we infuse our challenging college preparatory program with a global curriculum that fosters awareness, compassion, and engagement with issues beyond Castilleja."

At the event, approximately "800 gathered to explore the concept of power within the contexts of change, knowledge, global governance, and the individual, and sharpen their view of what it means to be a leader at the dawn of the new millennium." Speaking at the event were:[10]

As early as August 25, 2008[12], and as late as Sept. 10, 2009, Slaughter served on the advisory board of the Truman National Security Project.[13] The Project is an organization that seeks to recruit, train and elect progressives who will impact on National Security legislation. 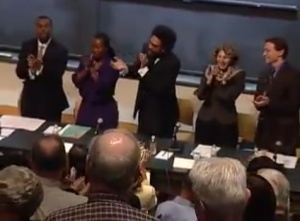 On November 5, 2008, the Center for African American Studies hosted an event entitled "Campaign '08: The Aftermath". Speaking at the event were:[14] 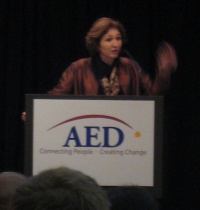 On November 17, 2009, Slaughter spoke at the Field Leaders Meeting for the Academy for Educational Development on the subject of Donor Trends and Priorities.[16]

Slaughter has worked on the Council on Foreign Relations' Taskforce on U.S.-EU Policy.[1] 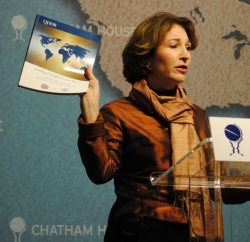 Anne-Marie Slaughter served as Executive Director for the Quadrennial Diplomacy and Development Review (QDDR), at Chatham House on Friday 21 January 2010.[17]

The QDDR is a study by the United States Department of State, first started in 2009 and intended to be done every four years, that analyzes the short-, medium-, and long-term blueprint for the United States' diplomatic and development efforts abroad. It seeks to plan on a longer-term basis than the usual year-to-year, appropriations-based practice, and to integrate diplomacy and development missions under one planning process. It similarly seeks to correlate the department’s missions with its capacities and identify shortfalls in resourcing. Finally, it is also a precursor to core institutional reforms and corrective changes. The first such review was completed as year 2010 drew to a close.

The initiative was announced by Secretary of State Hillary Clinton on July 10, 2009 at a State Department town hall meeting.[18]

On April 29, 2010 Slaughter addressed the 2010 Annual Conference of the Society for International Development, Washington, D.C. Chapter.[19]

"While sovereign Governments have the primary responsibility to protect their own citizens from such catastrophes, when they are unable or unwilling to do so that responsibility should be taken up by the wider international community ” with it spanning a continuum involving prevention, response to violence, if necessary, and rebuilding shattered societies."