Anna Ochoa O'Leary is University of Arizona Mexican American Studies department head. She is an associate professor in the department, received her doctorate in Anthropology from the University of Arizona. Her dissertation, "Investment in Female Education as an Economic Strategy among U.S.-Mexican Households in Nogales, Arizona," was supported by NSF funding. Since 2002, she has taught a range of classes for the Department. Currently, she teaches two graduate classes, Mexican Migration, and the Feminization of Migration, and an undergraduate class, Latin American Migration and the Remaking of the U.S.

She has a text book to her credit, a Chicano Studies textbook based on her teaching Overview of Mexican American Studies (MAS 265), which was published in 2007 by Kendall Hunt Publishing. More recently, she co-edited ) Unchartered Terrain: New Directions in Border Research Method and Ethics. (University of Arizona Press, 2013) and is editor of Undocumented Immigrants in the United States Today: An Encyclopedia of their Experiences (ABC-CLIO/Greenwood Press, 2014).

Her current research and teaching interests continue to focus on the education, culture and urban politics of Mexican/U.S.-Mexican populations, the political economy of the U.S.-Mexico border, and gender issues. Her community activities include participation in several non-profit community-based groups, such as the Coalicion de Derechos Humanos and Fundacion México.[1]

Dissertation title: “Investment in Female Education as an Economic Strategy among U.S.-Mexican Households in Nogales, Arizona.”

Master’s paper title: “The Bureaucratic Model of Industrial Organization and the Emergence of Class and Cultural Identity in Borderland Mining Communities.” 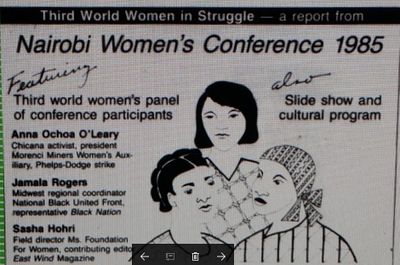 Jamala Rogers traveled to the Nairobi Women's Conference in 1985, along with Anna Ochoa O'Leary and Sasha Hohri. 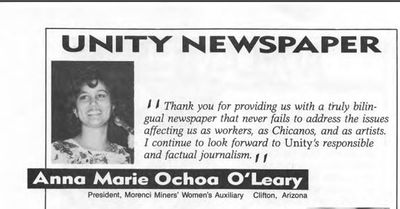