Ann Kirkpatrick is a Democratic member of the United States House of Representatives, representing the 1st district of Arizona. She returned to Congress in 2018, in District 2.

Ann Kirkpatrick received a donation from the Population Connection in 2020.[1]

The Labor Caucus is an official caucus in the U.S. House of Representatives. In 2021 members included Ann Kirkpatrick .[2]

You are not alone” was the message from Tucson Mayor elect Regina Romero to striking copper miners in Southern Arizona. She was addressing rallying strikers and supporters who came to picket their bosses at ASARCO’s corporate office lair on Tucson’s east side on Nov. 17 2019. Romero called out the company for refusing to bargain with the copper unions in good faith. She condemned ASARCO for offering only takeaways to workers, most of whom who have gone ten years without a raise, and wanting to more than double their workers’ out of pocket healthcare expenses. She also pointed out that German Larrea, CEO of Grupo Mexico, the multinational that owns ASARCO, is worth $13 billion, but won’t invest in his employees.

United Steelworkers Arizona Sub-district Director, Manny Armenta, thanked the community for their support and explained that after five weeks of refusing to sit down with the union, ASARCO finally met with the unions but offered only the same old nothing. Armenta urged the striking unions and supporters to maintain their unity. Armenta also introduced a railroad switchman visiting from Seattle who brought a check for $350 that his union collected for the strike fund as “a stand against corporate tyranny.”

Romero, who was elected earlier this month, will become Tucson’s first woman mayor, and the Tucson’s first Mexican American since 1876. Joining her at the rally were State Senator Victoria Steele, and representatives of County Supervisor Richard Elias and Congresswoman Ann Kirkpatrick, as well many trade unionists and community supporters.

About 2,000 union copper workers, represented by Steelworkers, Teamsters, Electricians, Operating engineers and four other unions walked off the job October 13 at three open pit copper mines in Arizona, a refinery in Amarillo Texas, and a smelter in Hayden, Arizona. The strike has forced ASARCO to cease operations at the smelter and refinery, but is still operating the three mines with scab labor.

The Mission and the Silver Bell mines are near Tucson so striking miners have been joined by union and community supporters, especially at the time of shift changes. The Pima Area Labor Federation and it’s member locals have been particularly active in support of the strikers, as is the local Jobs with Justice coalition, but it’s clear that the struggle needs to be broadened. ASARCO/Grupo Mexico is a corporate predator that has viciously and mercilessly attacked workers and their unions in Mexico and South America.[3]

Kirkpatrick received $7000 in lobbying funds from Planned Parenthood in 2008.

Kirkpatrick has been supported by EMILY's List during her campaigning.

In each election cycle, we endorse a diverse array of candidates who exemplify our values and show unusual promise to advance our progressive goals. We invest in some of the most competitive races as well as in some of the most challenging – those in which the candidates are outstanding but the traditional Democratic supporters are most reticent. We back candidates in primaries as well as general election races, and we focus the bulk of our resources on electing challengers and protecting vulnerable incumbents.[4]

Kirkpatrick was one of 71 key progressives endorsed by 21st Century Democrats in the 2008 election cycle, second round. [5]

In 2013 Progressive Democrats of America assigned activists to deliver their material to almost every US Congressman and several Senators. Sallie Kladnick, was assigned as contact for Rep. Kirkpatrick.[6]

Marking the 78th birthday of Social Security, the Arizona Alliance for Retired Americans members, leaders and community activists celebrated on Wednesday, August 14, 2013, at 11:30am at Armory Park Senior Center Tucson, . Attendees will celebrate the programs’ successes and released a new report detailing the impact of these programs on state residents. 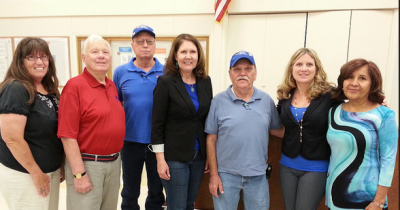 Ann Kirkpatrick, with members of the Arizona Alliance for Retired Americans, May 5, 2014
.

Medicare Birthday Party with Congresswoman Kirkpatrick Arizona Alliance for Retired Americans Monday, August 4, 2014 from 9:00 AM to 10:00 AM (PDT) Flagstaff, AZ.

With Medicare celebrating its 49th birthday last week and Social Security’s 79th birthday coming up on Thursday, August 14th, 2014, Alliance members have been holding celebrations across the country in honor of the retirement security programs. Richard Fiesta, Executive Director of the Alliance, traveled to Arizona from July 31st to August 4th in order to take part in some of the events. Alliance celebrations in the state included an event in Tempe with Rep. Kyrsten Sinema (AZ-9), an event in Tucson with Rep. Ron Barber (AZ-2), and an event in Flagstaff with Rep. Ann Kirkpatrick (AZ-1).[8]

In the 113th Congress, 50 members of the House of Representatives belonged to the New Democrat Coalition, including:[10]

Council for a Livable World 2016 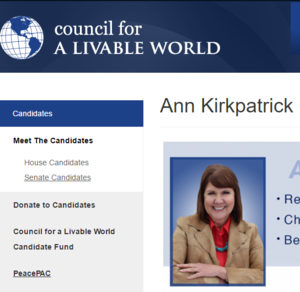 According to the Council;

Kirkpatrick knows that the United States must do everything it can to prevent the dangerous proliferation of nuclear weapons. She believes in the Kissinger-Schulz-Nunn-Perry vision of a world free of nuclear weapons and supports reducing the U.S. nuclear weapons budget to increase funding for other national security priorities.

The withdrawal of U.S. troops from Afghanistan is an important issue to her, as she stated in 2012:

“In 2010, I spent Mother’s Day in Afghanistan, visiting the troops and speaking with military leaders there. After that firsthand visit and those on-the-ground discussions, I became more convinced than ever that we must accelerate our exit from Afghanistan and bring home the troops.”

Kirkpatrick recently voted in support of the Iran nuclear agreement, saying, “The United States has an opportunity to lead the world on a historic and critical diplomatic course against danger and chaos.”

In 2018 Ann Kirkpatrick (D-AZ-02) for House was endorsed by Council for a Livable World.

Ann Kirkpatrick was born in McNary, Arizona, near the White Mountain Apache Nation in eastern Arizona. Kirkpatrick worked her way through the University of Arizona to earn her bachelor’s and law degrees. After college, she became Coconino County’s first female Deputy County Attorney in 1980 and in 2004 Kirkpatrick was elected to the Arizona House of Representatives.

In 2008, she was elected to the U.S. Congress in one of the largest districts (AZ-01) in the country. While she was defeated in 2010, she came back to reclaim the seat in 2012 and was re-elected in 2014, expanding her margin of victory in one of the toughest environments for progressives in recent memory. In 2016, she unsuccessfully challenged Senator John McCain. The Council endorsed her in that race.

Since the 2016 election, Ann has moved south to the Tucson area and declared her candidacy to represent Arizona’s Second District, currently held by Rep. Martha McSally (R). As McSally is widely expected to run for the Senate seat now held by Jeff Flake (R), Kirkpatrick will be favored for this open seat in both the primary and general election.[12]