Andy Guthrie is a Minnesota activist. 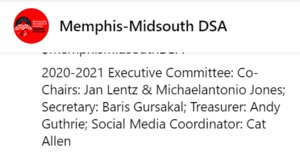 “Earlier in the month (April 4), we participated in a very inspiring rally at the Saint Paul Labor Center in support of two classes of unrepresented workers at Delta Airlines—flight attendants and ramp workers, including the highly exploited so-called ‘ready reserve.’ There was a huge crowd in the small but standing-room-only hall, including Delta workers, members of the International Association of Machinists (which is currently running a card campaign at Delta), other union activists, elected officials, and other supporters, including about a dozen from TC DSA. MN Nurses Association organizer Rose Roach, CD4 Congressional Representative Betty McCollum, and ramp worker Joe Evica were among the many inspiring speakers. ”[1]

In September 2017 Andy Guthrie was a member of the Democratic Socialists of Iowa public Facebook group.

In September 2017 Andy Guthrie was a member of the Iowa DSA-Social/Non-Business public Facebook group.