From KeyWiki
(Redirected from Amilcar Cabral)
Jump to: navigation, search 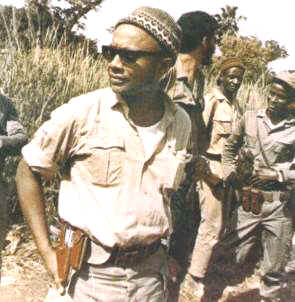 "How is it that we, a people deprived of everything, living in dire straits, manage to wage our struggle and win successes? Our answer is: this is because Lenin existed, because he fulfilled his duty as a man, a revolutionary and a patriot. Lenin was and continues to be, the greatest champion of the national liberation of the peoples."

These were the words addressed to the delegates attending the seminar on "Lenin and National Liberation" held at Alma Ata, capital of Soviet Socialist Republic of Kazakhstan, in 1970 by Amilcar Cabral, Secretary-General of the PAIGC, who met his death on 20th January 1973 at Conakry, Guinea, at the hands of a traitor, Innocenta Canida, an agent of the Portuguese colonialists who had infiltrated into the ranks of the movement three years ago.

These words reflect the revolutionary thinking and life-work of this utterly dedicated patriot, outstanding African revolutionary of our time and the father of the new independent sovereign State of Guinea in the process of birth. It was the cognition of the scientific theory of revolution, of Marxism-Leninism, to which he was introduced by his contacts with the Portuguese Communist Party during his student days in Lisbon which was to combine within him, in the words of the statement of the Central Committee of the South African Communist Party, "a deep understanding of the processes of the African revolution with an untiring devotion to practical struggle."