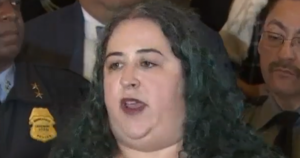 Aisha Gomez is a state representative based in Minneapolis Minnesota representing the Minnesota Democratic-Farmer-Labor Party.

The following is the DFL endorsement for Aisha Gomez:[1]

The youth in our community and beyond are stepping up and leading with a brilliant, discerning, intersectional lens. Being in community with young people is one of the great joys of my life right now and that's why it is such an honor to be endorsed by Minnesota Young DFL (MYDFL). I can't wait to continue building with them towards a collective liberation that honors all people.

"The MYDFL is thrilled to endorse Aisha Gomez for State Representative 62B.

Aisha is an organizer, Southsider, environmental justice-advocate, public servant, and a mom. She works as a Policy Aide with Councilmember Alondra Cano to craft key policies that impact Ninth Ward families and community members across Minneapolis. Aisha has helped pass a $15 minimum wage, earned sick-and-safe time, and fully fund our parks and streets.

She has the unique ability to skillfully blend movement work and electoral politics to bring authentic wins to her community. Aisha brings equity to everything she does and will be a true champion for us at the Capital and an absolutely build on the work of Representative Susan Allen.

We encourage all delegates in 62B to support Aisha Gomez for the DFL endorsement."

Democrat State Representative Aisha Gomez (DFL-Minneapolis) was spotted on a Livestream by Star Tribune reporter Andy Mannix[2] of a violent protest of a rally in October by President Donald Trump.[3] 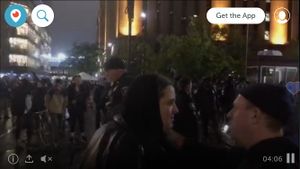 Aisha Gomez allegedly with Antifa at Trump rally in Oct 2019

In August 2019, Aisha Gomez and Michael Howard of the "People of Color & Indigenous Caucus" announced plans to introduce legislation[4] "banning for-profit ICE detention centers from operating in the State of Minnesota." She was quoted as saying: “We should prevent private prison companies from making a profit by locking up moms, dads, and children in cages,” said Rep. Aisha Gomez. “We’ve all seen the cruel and inhumane treatment of families on our southern border, and we cannot allow it to spread to our own backyard.”

In May 2019, Aisha Gomez wrote an OpEd called "Counterpoint: Reimagining Our Tax Policy is Not An Attack on Corporations - It’s Our Job"[6]

"A recent commentary published in the Star Tribune (Taxes and the legislative session: Stop attacking large Minnesota employers, May 2, 2019) claimed that DFL legislators have vilified large corporations in Minnesota by raising questions about tax loopholes and tax fairness.

"The basis of this commentary—the idea that what’s good for big corporations is good for people—has driven governing decisions for decades. As mothers, community leaders, and Indigenous women and women of color in elected office, we believe we are overdue for a new approach to tax policy.

"We have to end the lie of trickle-down economics and hold highly profitable corporations accountable to paying their fair share in taxes. Working people, women, and people of color can’t afford to wait as we perpetuate tax policy that has led to the greatest wealth and income inequality in generations. It hurts all of us.

"This flawed conservative ideology has allowed politicians to pass trillion dollar tax cuts for billionaires, like President Trump’s 2017 tax bill, while sending the message that there is not enough. Meanwhile wages stagnate, homelessness increases, schools fall farther behind, and many students are focused on finding food to eat and a place to rest their head at night.

"The same ideology has been used at our State Capitol this session to push statewide legislation that would strip power from local government, and block $15 wages and paid sick time from working people in our cities.

"What if, instead of accepting the trickle-down economic theory, we governed from Indigenous principles that emphasize respect, compassion, and wisdom. What if we approached our budgets under the premise that we are responsible for each other’s well-being and our environment? What if we replaced austerity with the notion that we live in a state that is resourceful and abundant? What if we replaced fear and political divisions with a deeper sense of community and interdependency?

"As budget negotiations at the Legislature ramp up, we call on our fellow elected officials to make a choice about the world we want to live in - one that makes things easier for the people at the top, or one that takes care of the families and working people across our state who are struggling to make ends meet.

"Our state budget is an opportunity for us to begin what Rev. Dr. William Barber calls a moral revolution - a call back to Rev. Dr. Martin Luther King Jr.’s 1960s Poor People's Campaign. The wisdom of that campaign is that poverty isn’t rooted in personal failure, but in structural inequity. The tremendous divide between those at the bottom and those at the top is a reflection of the fact that the wealthiest individuals and large corporations for too long have had their interests protected in policy-making.

"The antidote to this is reflected in Anishinaabe values that say that as community leaders, we do not belong in the mountains looking at those at the top. Rather, we belong at the center with the people, so we can hear their needs.

"The House DFL budget moves us closer to a more just state. It makes historic investments in public schools, affordable health care, safe communities, and tax credits for working families. All of this is possible because it challenges corporate influence in policy-making. It increases taxes on capital gains, brings back money that corporations are stashing in overseas tax shelters, and insists that the wealthiest Minnesotans pay their fair share.

"As elected officials, we’re confident that we can work together to provide meaningful tax reform to benefit those who have waited too long for wealth to eventually trickle-down on them. Our constituents tell us that the Minnesota they want to live in is a state that takes care of all it’s residents. And we are building that state, together. 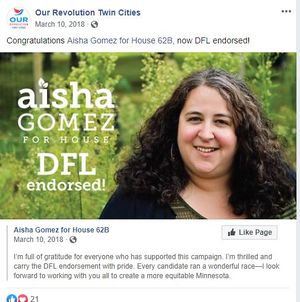 This organization appears to be still growing, although not as explosively, and yet still experiencing growing pains. In 2017, it incorporated as an independent 501(c)4 while solidifying its ties to the parent organization; elected a board of directors; and spawned several local affiliates, including one in Saint Paul. Another group (with some overlap) is called Our Revolution TC, but this is misleading, as they focus only on Minneapolis.

OR MN held a major membership meeting in Alexandria, Minn., and is making a major effort to be an organization of statewide relevance. On Jan. 6, OR MN held a very ambitious online RCV (ranked choice voting) poll for statewide pre-caucus candidate endorsements. It was perhaps too ambitious. They ended up walking back endorsements for State House and two for Congress, because many members, mostly outside the Twin Cities, objected to all members having a vote in all districts.

When all the dust settled, the following slate had been endorsed (CD = Congressional District): Tina Liebling, Erin Murphy, and Rebecca Otto for governor, Ryan Winkler for attorney general, Jon Tollefson for state auditor, Rich Wright for CD 1, Dean Phillips for CD 3, and Ian Todd for CD 6. OR MN made no endorsement in CDs 2 and 8 in order for local chapters in those congressional districts to consider local issues.

Highly critical of the technocratic online approach of OR MN, they focused on one big membership meeting and in-person pitches before voting at the meeting on Jan. 21, followed by a caucus training session on Jan. 30. (OR TC is credited with doing great caucus trainings.) Their slate of endorsees: Angela Conley for Hennepin County Commission District 4, Anthony Hernandez, House 60A, Jamie Long and Meggie Wittorf, House 61B, Hodan Hassan for House 62A, Aisha Gomez for House 62B, Jim Davnie for House 63A, Erin Murphy for governor, and Keith Ellison for Congress in District 5.

Late breaking Our Revolution news: A new group is forming called Our Revolution POC. Too early to say what they will get up to, but it sounds promising. Expect both local OR MN and OR TC members to be very active at DFL conventions this year.